Carl Barat has confirmed that his new solo album with his new band, The Jackals will arrive in early 2015.

Speaking of Barat, he confirmed to NME that he and Pete Doherty are currently writing new Libertines material that they hope to release next year. Barat, who is in Thailand to visit Doherty while he is in rehab, "This is only day two, so let's see how it goes. It's relaxed. My guitar broke on the aeroplane. I got a new one but right now the sound is two nylon string guitars - I don't think that'll make it to the record. We're still going through the old tracks and new bits and bobs and see where we're at, really. The songs are going to dictate their own sound. We've only done bits and bobs on tour. We were both reminding each other of scores of tunes that we'd forgotten that had never seen the light of day. But Plan A is to write new things. There's about five new tunes on the work bench at this stage and that's just from having been in each other's company, not even sitting down to write. One's called 'Woke Up Again', but that's a working title."

Billie Joe Armstrong is no stranger to acting, he appeared during Green Day's Broadway production of American Idiot in 2011, now, Armstrong will star in his first feature film role and will have the title role in the upcoming film, Geezer. The film is about a man going through his midlife crisis and looking to relive his old punk days. It also stars Judy Greer, Fred Armisen and Selma Blair. Armstrong is also writing the music for the film.

Gang of Four have announced their new album, What Happens Next, it is the first record from the band to not feature singer Jon King. John “Gaoler” Sterry is stepping in on vocal duties, as is Alison Mosshart of The Kills / Dead Weather, Herbert Grönemeyer and the Big Pink’s Robbie Furze. It arrives in February. Take a look at the cover, below: 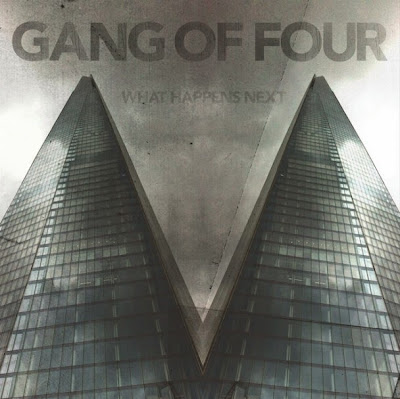 Posted by Salvatore Bono at 5:59 PM