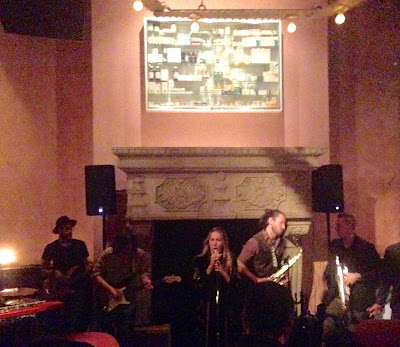 In an ultra chic environment where original Damien Hirst paintings and installations hang from the walls and everyone that walks around could be stepping out of the latest Victoria's Secret catalog or GQ issue, it is hard to find something that will take away from the ambiance. Inside the Rose Bar at the Gramercy Park Hotel, New York City's very own Miss Velvet and her band reduced everyone to simple shock and awe as the power of her voice compelled the packed room.

Miss Velvet, who was wrapping up her month long residency at the hotel, went out in grand fashion. The singer, whose debut, Dreams Are Not For Us, arrives in May, has been able to make a room full of New Yorkers not pay attention to their phones, their friends, clients and whatever us New Yorkers do when we go out and just focus on her.

The focus and appreciation comes from her powerful pipes which pack a serious punch. Think the soul of Janis Joplin meets the strength of Patti Smith. Miss Velvet, who was a trained like an opera singer to control her voice, takes her talents to the places of her parents -- the heart of the 60s and 70s rock and roll. With her spastic movements, dances and swinging a mic stand around like she was Steven Tyler while her fantastic band just simply displays their raw talent, this singer is one to look out for. In a set filled with originals, she managed to sneak in a cover of The Clash's "Train In Vein" and snippets of Bon Jovi's "Dead or Alive" as the audience danced, clapped and supported what she was putting out.

"Miss Velvet will you marry me?," one fan screamed toward the end of the night. It could have been a joke or it could have been serious, either way, it was able to drive someone to ask for it.
Posted by Salvatore Bono at 8:01 PM