Speaking to The Guardian, Jeff Tweedy has confirmed that Wilco will have a new record out in 2016. "Will have another one ready to go this year," he said. The new album will be a follow-up to last year's surprise release, Star Wars.

Chris Baio of Vampire Weekend told fans that a new record from the band will come but will take some time. He told NME: "Right now I think it’s early days, I haven’t actually done any work on the next Vampire Weekend record, but I'm really looking forward to it." He added: "I can’t wait to tour it, but there’s still going to be a little bit of time."

Also speaking to NME were Slaves and said a follow-up from their bombastic debut, Are You Satisfied? is coming soon.  Guitarist Laurie Vincent said: "We’ve written a load of demos and we’re going to make a new album and yeah, keep having lots of fun." Drummer Isaac Holm called the new songs "heavy, dirty and fun."

Scotland's Frightened Rabbit will release their new album, Painting of a Panic Attack, in April. Take a look at the tracklisting, below:

Eric Clapton will release his new record, I Still Do, in May. The album will also feature a posthumous guest as George Harrison will appear on the song "I Will Be There." The appearance will be labeled as "Angelo Mysterioso"  according to NME. It is the same pseudonym Harrison used on Cream's album, Goodbye. Take a look at the tracklisting, below:

'Alabama Woman Blues'
'Can’t Let You Do It'
'I Will Be There’
'Spiral’
'Catch The Blues’
'Cypress Grove’
'Little Man, You’ve Had a Busy Day’
‘Stones In My Passway’
‘I Dreamed I Saw St. Augustine’
‘I’ll Be Alright’
‘Somebody’s Knockin’
‘I’ll Be Seeing You’

Blaqk Audio, the electronic offshoot featuring AFI's Davey Havok and Jade Puget, will release their new album, Materials, in April. In a press release, Havok said: "My anticipation for each BA release heightens as we grow. For me, lyrically, Material is darker than our records of the past.” Take a look at the cover, below: 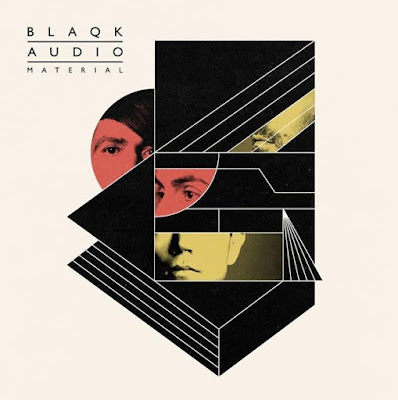 Posted by Salvatore Bono at 4:37 PM