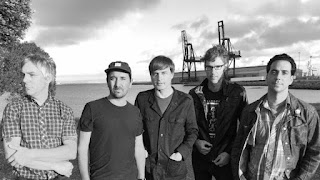 After 10 years apart, the original line-up of Film School are back together. Following much soul searching and healing, they returned to the musical waters this weekend with the EP, June. The band has gone through various incarnations through the years, but the one that fans first fell in love with are back and return with a mature, adult sound but the same cinematic feeling that makes their music part of the soundtrack to your life. To celebrate the release, we spoke to singer Greg Bertens  about the reunion.

It took 10 years for fans to get new music from this lineup, what was the hold up?

Well, half the band wasn’t talking to one another. And Film School was writing and playing under a different lineup since 2007. Around 2011 I was done with music and needed a break. But in 2015 drummer Donny Newenhouse brought the original Beggars lineup back together for a reunion show for his birthday. It was a little unclear how that was going to work out, but we had a great time. We decided to write some new music together.

The EP is called June, what does it signify?

To me it’s about things bigger than yourself, like a season, and how they can affect you for better or worse. There’s also a track on the EP called June.

Since June is an EP, is a full length in the works?

Yes, should be coming out later this year.

What was your inspiration behind the songs?

Our process has always been pretty organic. All of these songs started as jams in the studio and were made into songs. City Lights actually came from the first jam together after 10 years apart. The vocal melody and lyrics are inspired by the music that’s already been written.

So much has happened within this band in 10 years. Some members left, some of you guys got married, some divorced, some had kids, has all of that influenced the making of this record?

Very much so, especially from a lyrical perspective. Things just get more complex as you get older and you find yourself going deeper in whatever direction you’ve taken in life. The title track June is about feeling overwhelmed, maybe even desperate, due to circumstances and the possibility of turning to something bigger than oneself (like a season) to help get through difficult times.

Being a bit older and having full time jobs, families, do you plan on touring? If so, how?

Good question, not sure how that’s going to work. We’re just playing what makes sense at this point. A couple west coast shows to support the EP. Depending on how the EP (and album) does we might try to get out of CA for some shows. There’s some talk about festivals, we’ll see.

What can fans expect with June?

Have you ever heard of Pantera?

What was it like coming together for the first time and playing again?

Exciting, scary, relieving, redemptive. It's like a bad breakup with a happy ending 8 years later. It was painful, but a lot of growth happened during that time for all of us. I don’t want to speak for everyone, but once we got over that initial nervousness I think we were all really happy to be back together again.

Hailing from San Francisco, how has the city influenced your work?

SF is a great city for experimenting with your craft and finding your own voice, or it used to be anyway. I’m not sure anymore since I haven’t lived there since 2006 and a lot has happened since then. Because there’s no commercial expectations everyone just seems to do their own thing. And everyone was fiercely independent back in the day, I liked that vibe.

What is next for you once June is released?

Looks like there will be an album coming later this year. We’ll see, we’re taking it as it comes.

Posted by Salvatore Bono at 9:56 AM