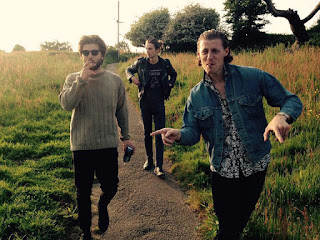 Last month we introduced you to rising London rock and rollers Dirty Orange. The band, who formed last year, featuring frontman and guitarist George Wilkins, bassist Scott Thompson and drummer Connor O'Shea released their debut EP, The Short Story About the Lady of the Night. The band take everything that is right about British rock and roll culture and give it a much needed kick in the balls. Finally, there is a band that plan on reving things up and taking it to 11. In their first ever interview, we spoke to Wilkins about the bands dreams, sound and style. Take a look at our interview below:

This is something you will be asked over and over again, it is generic but I need to ask, where does the name come from?

Hailing from London, how much has the city influenced you?

A shit load, greatest city in the world. Always something happening.

The band has been around for less than a year, you have been gigging and just released an EP. Do you feel time is flying for you already?

Yeah I guess it is, but we never stop or dwell on any particular moment. Constantly striving for more…whatever that may be.

Where do you see yourself next year?

Following the headline making Brexit, many have suggested that music from the UK will be richer, deeper, more raw, do you feel you can lead the pack?

We don’t get to caught up with “the cabinet”. But if in the long run its going to change the way rock bands write, then happy days. As British band’s died after 2006.

There have not been a power trio in years, you guys go back to basics, was that the initial plan of the band when forming?

100%, we’re tired of 10 piece bands performing with huge effects pedals and fucking putting our slot in the bill, back half hour… by which point we’re all hammered.

How did the band form?

None of us wanted to work 9 to 5 … so I picked the guitar , Scott followed with the bass (he’s still learning) and we contacted animal from the muppets to play drums for us, Dirty Orange was born.

Being a British guitar band, do you feel a responsibility that you must always be on point and on your game to uphold the legacy of bands from your land?

Definitely, mega British guitar bands are fading and we feel a huge responsibility to be the best, and if we thought otherwise what’s the point?

People are saying that rock is dead, how do you respond?

Who is 'The Lady of the Night' that your EP title refers to?

The lady of the night does not refer to a particular person Sal, its more an experience which every other person can relate to.. In some shape or form.

What does Dirty Orange mean to you?

Rock and roll used to be dirty, vulgar, raw, powerful. It seems to have taken on so many different forms but those are not any of them anymore. How do you plan to change that?

By doing just that, don’t ever be afraid to be honest, never stand still. We want our music to be an accurate reflection of who we are and what we believe in. We will always speak our mind through our lyrics and sound. That will always be enough for any band to be truly, as you described, fucking ROCK N ROLL… Period.

If in London next month, the band perform at The Miller, see below: 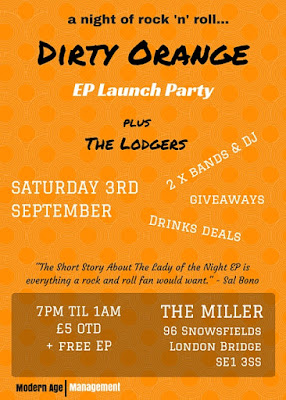 Posted by Salvatore Bono at 1:45 PM