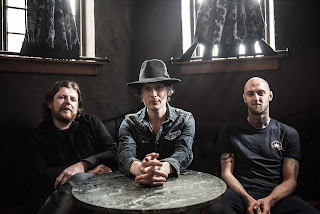 Early on last decade it almost seemed as if America was experiencing another British invasion. Long after the initial wave of The Beatles and Stones in the 60's or the new wave and post-punk bands of the 80's and the Britpop bands of the 90's, the new millennium had an influx of artists from across the pond that were ushered in on our shores. Bands like Arctic Monkeys, Bloc Party, Glasvegas, Franz Ferdinand,  Editors, Kasabian, and a chock full of others were bringing in a new era of sounds from the UK and into our earbuds. One of those bands, Scottish trio The Fratellis experienced a cannon-burst of fame straight away. Their debut, Costello Music received universal acclaim, massive chart position in various countries. They won a Brit award for "Best Breakthrough Act," opened for The Police on their farewell tour, and had what could be the catchiest iPod / iTunes commercial in Apple's history. After nonstop touring and recording, the band went on hiatus in 2008. While the members focused on other projects, in 2013 they got back together and next month will release their fourth album, Eyes Wide, Tongue Tied. We spoke to singer Jon Fratelli about the new record, coming back together, and releasing music on the 30th anniversary of The Goonies --which is were they take their name. Take a look at the interview, below:


The new record, ‘Eyes Wide, Tongue Tied,’ is your fourth, what did you do differently on this album that you haven’t done before?

I think the biggest change was taking a back seat with regards to production and simply concentrating on writing songs. It proved to be a far simpler way of working.

After a five-year hiatus, you returned in 2013, what sparked the reunion?

My answer to why we split up and then reformed is pretty much the same really; it's just what happened! It seemed the like the right thing to do on both occasions. I'm glad though that the desire to play together again arose.

Now that you are back, it seems as if you hit the same writing nerve you had early on. How does it feel to have the family back together?

We probably get more out of playing together now than we ever did. We really do have the perfect job for people like us.

You reteamed with Tony Hoffer to produce the new record, what is your relationship like with him?

One of complete trust in the studio and of genuine affection out of it. It's a rare combination.

The band had a number of side projects when you were on hiatus, will you ever go back and revisit them?

I never think of things in terms of "side projects" as they take the same amount of enthusiasm and work as anything else. If the time comes to do something like that again then it'd be pointless to resist though personally at the moment I’m pretty happy where I find myself.

When the band started out, it seemed like you were shot out of a cannon. From iTunes commercials to opening for The Police on their reunion. How did you handle the sudden international fame?

Probably not very well! We probably should have enjoyed it a bit more. There's no set of instructions though so I guess it's understandable. Looking back it was pretty damn funny how far we were able to push our luck.

You get your name from the fictional family in The Goonies. This year marks the 30th anniversary of that film, what is your favorite scene from that movie and why?

I've never seen it!! Barry and Mince will be horrified...

This band has always had such a tremendous live show. When the gig ends, what do you do to decompress after such intense gigs?

I'd love to tell you tales of debauchery but a glass of wine and some peace is my favorite post gig combination.

Now that it is the summer and you are hitting the festival circuit, what are those shows like in comparison to the club gigs?

It really depends on the audience; they make a show regardless of the venue. I've been surprised enough in the past to never try and predict these things, as long as the reaction is genuine and tangible we're happy.

How do American audiences differ or compare to your hometown crowds?

Again it's hard to predict but in general I find US audiences enthusiastic and warm but also totally open to allowing you the freedom to play newer songs that they might not be as familiar with, as a thank you for that we make sure to play as many of the more familiar songs as possible

Burning Question – Are these still crazy times down at Costello music?

Once in a while... we can't keep up with the pace like we used to but I've seen enough evidence in the last couple of years to know that we still have the odd moment!

**Photo Credit: Stephen Kyle**
Posted by Salvatore Bono at 8:17 AM