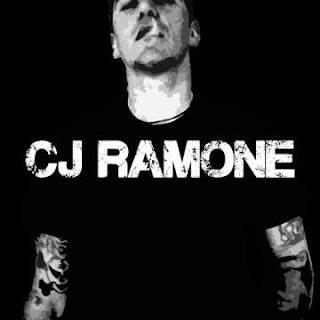 Picture the scene, you are 23 years old, a working musician and then one of your favorite bands come calling to audition. For Long Island native, Christopher Ward that is what happened to him in 1989 when The Ramones were in need of a bassist after founding member Dee Dee abruptly quit the band to start a hip-hop career. From the second Ward auditioned, the band new they had someone that fit the bill, Christopher Ward became CJ Ramone and was with the band until they ended in August 1996. CJ grew up fast, learned the business, and helped keep the band "young." While the band has been gone for over 15 years, the legacy The Ramones left behind is timeless. As he is currently doing a Pledgemusic campaign for his new album, Reconquista, CJ is still touring the world performing his solo material as well as work from The Ramones, he is currently in South America, which still to this day holds the biggest Ramones fanbase in the world. We spoke to CJ about the memories of playing with the originators of punk rock, his solo career, and life after The Ramones. Take a look:

First and foremost, you are from Long Island and continue to live there, how are you and your family after Hurricane Sandy?

We made out ok. Lost power for about 12 hours, had to rebuild a fence and do some minor roof repair, otherwise undamaged. A hell of a storm though!

You were part of The Ramones for seven years, how did you get involved with playing with them?

I went to an open audition at SIR studio on 25th st. in NYC.  It was a seedy, rundown industrial area in the late '80's. Now it's all art galleries and the old elevated train trestle that runs over the street is a walkway/park.  I'd heard about the audition from a friend that was playing drums for Joeys brother Mickey. I was in the Marine Corps at the time, but went to the audition just to meet the guys.  Of course I got more than I'd bargained for in the end!

When you came on board, you replaced Dee Dee in the band. What was it like stepping into those shoes?

I tried not to think of my position as a replacement for DeeDee.  He is the original, no one does it better. He was also a huge influence. I looked at like I'd been hired to do a job and I needed to do it to the best of my ability.  I did not want to disappoint Johnny and Joey!

By the time you came on board they were a well oiled touring machine, what was the work ethic like? Was it strange being the new guy in the band?

Johnny ran the band.  There were rules that were not negotiable and if you screwed up, you answered to him.  He was not very forgiving. I was "Baby" Ramone til the band retired. Being the new guy never went away.  I didn't mind a bit.

Where you a fan of the band when you joined them or did you look at this as a good job and some work?

I was a huge fan, but I still considered it work.

Since the band were road dogs, what was it like being on the road with The Ramones?

The road was like everything else.  Moments of greatness, moments of pain, boredom, and  suffering.  Mostly just fun.  Countless hours in airports, on planes, driving hundreds of miles in vans or busses.  The joke was we don't get paid for shows, we get paid for the other 22 and 1/2 hours of endless traveling and eating crappy road food.  Not to mention jetlag!

What is your greatest memory about playing in The Ramones?

Probably my first show.  September 30th, 1989 in Leicester, England. I got hit with coins and bottles and was covered with spit by the end of the show.  I loved every second of it.

When the band had their final show in LA in 1996, what was it like when the gig ended?

Anti-climatic.  No one said good bye or shook hands.  I didn't even realize the band had left til Johnny's roadie came over and told me that they had left and that Johnny said I could have the bass amps 9.  Like I said DeeDee was my hero, I was as excited to play with him as I was when I got the Ramones audition.  He was one of a kind!

You are about to release your debut, Reconquista, what was it like making your first solo record?

The actual recording was one of the best experiences I've had in the studio.  Steve Soto from the Adolescents helped me put together an album I am really proud of and deserves to have the Ramone name on it.  My buddy Jose Medeles did drums and percussion and we rounded out the record with guest players from Bad Religion, X, Social Distortion, The Adolescents, The Street Dogs, Flogging Molly, and Blondie.

Now that you are on your own, what is it like making music for yourself?

I'm a band guy. I like being part of a team where everyone kicks in.  Doing it on my own is fun, but I miss the band thing. The best part, no arguing, egos or attitudes!

When did the idea come about to finally ditch being a band and just record under your own name?

After my last band Bad Chopper split.  I'd had enough and thought it was a good time for a CJ solo act.

What has been the most rewarding experience you have had being a musician?

Having my wife and kids on stage with me at Madison Square Garden watching me play with Pearl Jam.

Posted by Salvatore Bono at 7:41 AM