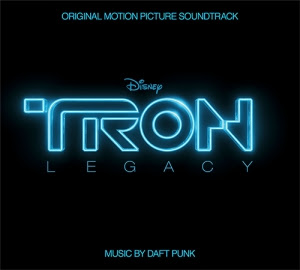 It was five years since fans got a new Daft Punk album, so when they returned to the spotlight in 2010 on the Tron Legacy soundtrack, some thought it was a perfect fit and others scratched their heads. The long awaited sequel to the 80's classic arrived five years ago and doing the score were France's robot rockers.

The soundtrack, which had elements of the duo's hard electronica, was their first venture into the musical score territory. It sounded like a Daft Punk album but didn't feel like one, probably because the folks at Disney had something to say about it. Nonetheless, the soundtrack is still a cosmic trip out of this universe and into the next.
Posted by Salvatore Bono at 6:25 PM