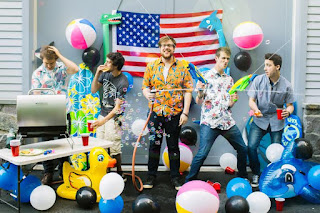 The reason why bands are formed it is the obvious factor of wanting to make music that makes you feel something and hoping that it gets across to an audience that can experience those emotions and / or relate to them. Another reason is to have a ton of fun with your friends in creating something that is so unique to who you are. For New York based Reckless Serenade they are not only having more fun than anyone around these days, they are doing it in such a manor that has even gained them the praise to 'be the next My Chemical Romance.' We spoke to guitarist Mark Neidhardt about their debut EP, Out There, which was just release;  their growing fanbase and the amount of fun he and his friends are having being in this band. Take a look at our interview below:


The name of the band comes from an Arctic Monkeys tune off the very underrated "Suck it and See." What was it about that song and even that album that made you pay homage to the British band?

We felt the name Reckless Serenade really fit our style of playing because we like to write all different genres of music and not get pigeon holed to one genre.

If you ever get the opportunity to play with Alex Turner and Co., how do you think they would react to your name?

Hopefully he would think it's cool haha! I'm a big Arctic Monkeys fan so maybe he'd like the fact we named our band after one of his songs and he'd want to hang out with us.

You have been hailed as the next My Chemical Romance by fans and some critics. Do you feel a pressure to live up to that?

We're just stoked that people would say that about us! We've never been too worried about what other people think about our music, we've always just wrote music that we wanted to hear. MCR is one of our favorite bands but we don't feel pressure to live up to them we're just doing our own thing.

You are a band that doesn't take yourself too serious but does take making music a serious matter. Do you feel that is the key to your success?

Absolutely! We're doing this because it's what we love and it's fun and if we're not having fun then we're doing something wrong. If you see us live you can tell we're all genuinely having a great time on stage and I think that's one of the best parts of our live shows.

After being in a band for nearly five years, you are releasing your debut EP. What was that moment like to have it done and out there?

We're excited to finally release it! These are the best songs we've written as a band and we're just stoked to have everyone hear them. We're really happy with how it came out and had an absolute blast making it!

What can you tell us about the EP?

The EP is a great representation of what we're trying to do with our music which is explore as many different genres as we can. Each song on the EP is different from the next and we think that keeps things exciting for anyone listening. Each member of the band comes from a very different musical background and we think that really shows on this EP.

You seem to be having a blast playing and touring, does this ever feel like work to you?

We're all here because we love playing music above all else. Every tour we've done has just felt like a road trip with our best friends and if it ever does feel like work we just remember that could be working desk jobs instead of touring the country playing music having a blast!

With an EP under your belt, when can fans expect a full length?

We really want to tour a lot on this EP and give it as much exposure as possible before going into a full length. Although, we've been known to just jump into things at the drop of a hat though so maybe a full length will happen sooner than later who knows!

This band finds it's appeal in a younger audience because you are speaking to subject matter they relate to. Was that ever your intention was to give someone a voice that didn't have one?

We have always aimed to write music that people resonate with, however I wouldn't say that we wanted to give anyone a voice- I don't think we would ever want to impose our own voice onto anyone. Instead we wanted to have songs people could relate to or identify with. There are so many different obstacles people face when they're growing up, and I believe it comforts people to hear us singing about things that they themselves are going through. If anything I would say we want to inspire people to find their own voice- to see they aren't the only one going through whatever they might be going through and that it always gets better.

Following this fall tour, what is next for the band?

After this fall tour we'll be hitting the road with I Set My Friends On Fire in November. We're going out for a little over a week and we'll be going to Canada for the first time! After that we're just trying to hit the road hard until the end of the year.
Posted by Salvatore Bono at 2:47 PM