Keith Richards has confirmed that The Rolling Stones will record a new record. He spoke to The Quietus and said: "Yes! We must go in the studio! I was at a meeting with the lads three or four days ago where everybody said, 'Yes! We must go in the studio! Where or when I can’t yet say but in the near future. At last I’ve got the boys wanting to get into the studio. They all have to want to do it at the same time. That’s the thing with guys – you can’t drag 'em in at gunpoint – but I’ve got the message that they want to. I’m hopeful, y’know?"

Rihanna has confirmed to NME that her new album isn't finished but it will be "something great" for fans when it arrives. A time frame as to when the record will come out is also unknown.

Benga formerly of Magnetic Man and Skream and Benga has confirmed via Twitter that the real reason he retired from music was not to start a family, like he suggested last year but instead it was due to his bipolar disorder. He said:

Who wants to do my lead interview on my mental health issue I would like to get this heard now. I'm asked so much about my retirement. 💫🙌
— BENGA (@iambenga) September 16, 2015

I might as well explain it on here. My bipolar was brought on by drugs and the schizophrenia was the result of excessive touring. 👊🙌
— BENGA (@iambenga) September 16, 2015

Which is why I dont want sympathy but to raise awareness. Because if I had help early the damage could have been controlled!
— BENGA (@iambenga) September 16, 2015


Gorillaz artist Jamie Hewelett will feature his work in a new gallery exhibit called "The Suggestionist" in London beginning next month at the Saachi Gallery.

Johnny Marr will release his first live solo album, Adrenaline Baby, next month. The songs were recorded during his Brixton and London gigs of the 2014 Playland Tour. Take a look at the tracklisting, below:
01 Playland
02 The Right Thing Right
03 Easy Money
04 25 Hours
05 New Town Velocity
06 The Headmaster Ritual
07 The Messenger
08 Back In The Box
09 Generate! Generate!
10 Bigmouth Strikes Again
11 Boys Get Straight
12 Candidate
13 Getting Away With It
14 There Is A Light That Never Goes Out
15 Dynamo
16 I Fought The Law
17 How Soon Is Now?

Underworld will reissue their album, Second Toughest in the Infants, in November. The reissue was remastered at Abbey Road and will feature the remastered LP, along with remixes, B-sides, unreleased tracks and a 60-page booklet.

Ride will reissue their 1990 album, Nowhere, as a CD/DVD featuring the remastered album and a DVD of a 1991 London gig. The reissue comes out in November.

Is Nas going to release The Lost Tapes 2 next year? Mass Appeal CEO Peter Bittbender spoke to The Drip and mentioned that it will be coming. He said: "Nas is working to deliver this next record to Def Jam, which will be his last [for them]. I haven’t been too involved in that, so I can’t tell you when it’s coming. Once that’s out, then Lost Tapes will follow shortly after. It’ll definitely be a 2016 release, hopefully earlier in the year than later. The music’s amazing. It carries on what he built with the first Lost Tapes. The fans are gonna love it."

Fiction Plane will release their first album in eight years, Mondo Lumina, in November. Take a look at the cover, below: 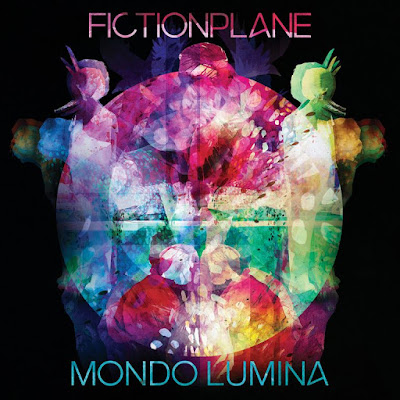