The Dead Weather will make their live return in two weeks when they are the music guest on The Late Show with Stephen Colbert. They join Kendrick Lamar, Run the Jewels and TV on the Radio as some of Colbert's first music guests.

Lupe Fiasco's third album, Lasers, ended up being a fiasco both critically and commercially. Now, the Chicago rapper is offering to destroy copies of the album with an actual laser. He wrote on Facebook: "For all you people who really hated my 3rd album LASERS for whatever reason in the universe I want you to send it back to me so I can destroy it with an actual Laser. You not getting any money back or an apology or anything like that. The fact still remains that a lot of people really loved LASERS (Me Included) despite the popular myth that it’s one of the worst rap albums ever but sometimes the myth can be stronger than the truth. So yeah….if you have a physical copy of LASERS that you absolutely hate and wish for it to be rendered non-existent then you can send it back to me and I’ll have it destroyed with an actual giant laser and send it into next world in spectacular grand fashion!"

Garbage will reissue their 1995 debut in October and will be re-mastered from the original analog tapes. The reissue will also feature remixes and B-sides, which they're calling G-sides.

Travis Barker has announced he will release his autobiography, Can I Say, in November. Take a look at the cover, below: 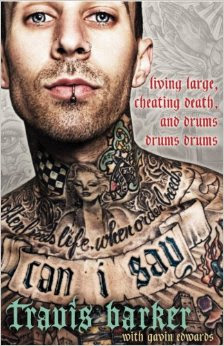