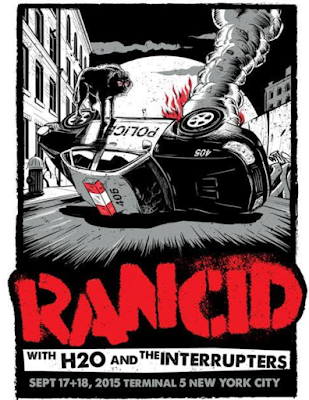 It was a punk rock extravaganza that threw back to the glory days of scene at places like Wetlands, Limelight, The Continental, CBGB's, The Ritz, as Rancid and H20 performed together at Terminal 5.

It was a two-night session as fans, young and old, sold-out the popular venue which could probably hold a few of the older places mentioned that these bands played in combined. As over 3,000 screaming fans gathered to relive the old days and make new memories.

Rancid and New York City have a long history together, especially since they recorded their classic record ...And Out Come the Wolves, in the city 20 years ago, which is why they are hitting the road. As the band hit the stage at 9:30, it was pure pandemonium as they tore through "Maxwell Murder," "Radio," and "Roots Radical." With a bald Lars Frederiksen and a bearded Tim Armstrong, the band looked different but the style was all the same. As the crowd on the floor crafted circle pits, crowd surfed, and slam danced, the members of the band fed off the energy and played louder, faster, and harder. In typical Rancid fashion, they had their friends and family on stage to watch them perform. The posse that they had was enough that could have filled a venue of it's own, yet, that is what Rancid is about -- their family and whoever it may be, the message was loud and clear -- have fun and love each other. Which after over 20 years as a punk band that has gain the success they have had, it is clear that living by those rules may not typically be punk but indestructible. As they charged through their catalog, it was the hits from Wolves that gained the most attention and applause -- songs like "Time Bomb" and "Ruby SoHo," stole the show.

One of their extended family, NYC's H20 opened the show and expressed their gratitude to the California icons as it was Rancid who gave them their first exposure and got them a record deal with Epitaph 20 years ago. Even H20 singer Toby Morse was in their video for "Time Bomb." As H20 hit the crowd with songs like "One Life, One Chance," "Faster Than the World," "Family Tree," "1995," they paid homage to their own history and the roots that made them become a band. From shout outs to The Ramones and Madonna to bringing NYHC Agnostic Front's Vinnie Stigma on stage, H20 are still going strong 20 years later and bringing their music at a high octane level but never forget where they came from.

Amazing 3 shows with our brothers @rancid thank you for having us & being incredible as always! #Family #RancidPunx
A photo posted by @tobymorse on Sep 18, 2015 at 9:20pm PDT