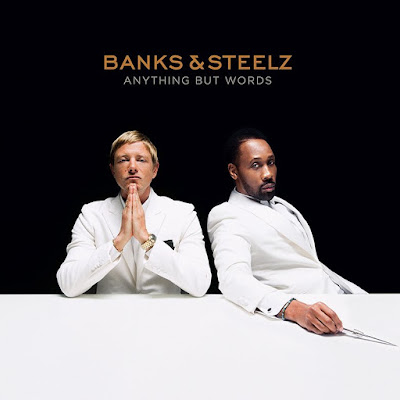 The debut album from Wu-Tang Clan's RZA and Interpol frontman Paul Banks aka Banks & Steelz, Anything But Words, will arrive in August.

RZA told Pitchfork how the unlikely New York artists came together in a recent interview. He said: "I was in New York at the time. Paul was in New York, and my manager—I don’t know exactly what happened. I know I was smoking a lot of weed during that period. All I know is that I met him at a tequila bar, I remember that. And once we met it was just two New York musicians connecting. That was really the foundation of it. My manager was a fan of Interpol’s work and he got me familiar with it as well, so it was more like two musicians hooking up, breaking bread, and just vibing out in the city."

Take a look at the cover, above, and the tracklisting, below, and hear the new single "Giant."

Posted by Salvatore Bono at 5:37 PM