Speaking to fansite Gorillaz North America, Jamie Hewlett said that the new album from the animated band will not be released until next year. He said the new Gorillaz recor is a "really fuckin special" album that "can't be rushed."

WE GOT JAMIE NEWS! This here is HIM and our friend Linda. JAMIE says new GORILLAZ is special, really fuckin special. Can't be rushed. 2017, yo. Fuck. So, guys, that Gorilla Fund, we got time. Go shop, take vacation, that shit aint happening this year. BUT its gonna be all that and more. And....Jamie follows us. So....you got something to say to him and don't wanna get yelled at on his IG by his very serious followers, say it here! HE IS HERE. Watching, reading and digging it. He loves this account and appreciates our repping. #JamieHewlett #JamieSaid #ThoseWords #FuckinAye #Gorillaz #Gorillaz2017 #ThisIsNotOurFace #WeTookThePic #HalfOfUsWasThere #OtherHalfInMontreal #Explanations #DidWeMention #JamieWasMadCool #Animated #Friendly #GangstaToo #HisShow #HisArt #SoCool #Go #IfYouCan
A photo posted by GorillazNorthAmerica (@gorillaz.northamerica) on Jun 12, 2016 at 6:38am PDT

Frank Zappa's estate will release two unreleased records from the legendary alternative rocker. The albums, Frank Zappa For President and The Crux of the Biscuit, will be released next month.

Speaking to the audience at the Metal Hammer Golden Gods awards, former Slipknot drummer Joey Jordison addressed his 2013 departure from the band. He said he left due to personal reasons, which now ended up being a medical condition. "I got really really sick with a horrible disease called transverse myelitis, I lost my legs. I couldn’t play any more. It was a form of multiple sclerosis, which I wouldn’t wish on my worst enemy."

Kaiser Chiefs will release their new album, Stay Together, in October.

In a new interview with Clash magazine, Eric Clapton says he is lucky to be alive and in pain when he plays guitar. The iconic lickmaster said: "I've had quite a lot of pain over the last year. It started with lower back pain, and turned into what they call peripheral neuropathy. [It's] hard work to play the guitar and I've had to come to terms with the fact that it will not improve."

Deftones frontman Chino Moreno will play a historic performance inside a volcano -- 400ft underground in Iceland at the end of the week. The performance, which has just been announced, is part of the Secret Solstice Festival.

Schoolboy Q has announced that his new album, Blank Face LP, will be out next month. Take a look at the cover, below:

The 20th anniversary to one of the greatest books on music and the punk rock era, Please Kill Me, will be reissued later this summer with new photos, chapters and an afterword. 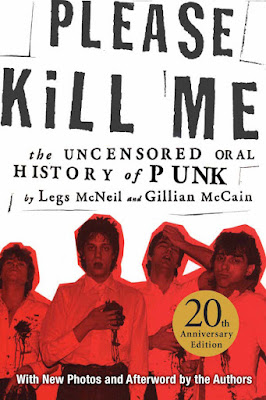 Posted by Salvatore Bono at 7:07 PM