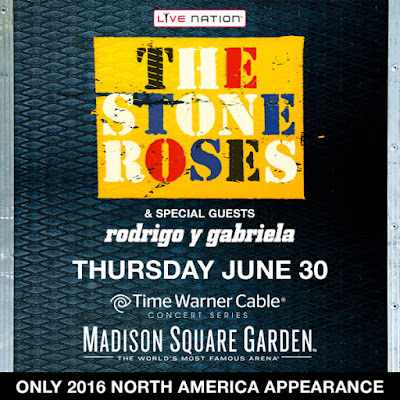 In the last week, Great Britain has left the EU, England crashed out the Euros against Poland and the British PM announced his resignation and butchered Smiths lyrics on top of it. Needless to say, it must have been a very strange and hard week to be British. Something needed to bring the people together and it just so happened that something would be one of their finest bands playing The World's Most Famous Arena for the first time in their career.

The Stone Roses have been on a small summer tour, mainly playing their hometown of Manchester and will eventually head to other parts of Europe but in between they returned to New York City for the first time in over 20 years and for the first time with their original line-up. 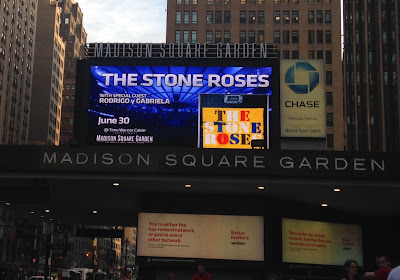 Since reforming in 2011, the band have toured all over Europe and their only stop in America was the 2013 Coachella festival. Now, they added The Big Apple to the mix.

Ian Brown, Mani, John Squire, Reni, the gang was all there and as the houselights dimmed at 9:15 p.m., they arrived on stage to a heroes welcome. "New York, nice to see you," Brown belted before Mani plucked his bass to open with the appropriate, "I Wanna Be Adorned."

At many points in the night it looked as if they were nervous, shy and a bit afraid, yet as the evening progressed they began to command the stage. Brown would dance around, play his sleigh bell tambourine, as his band projected a sound that the audience waited for -- something that no record could hold -- raw power. They sounded so perfect. 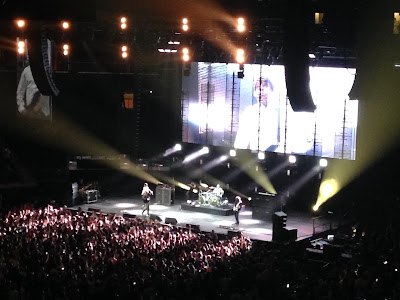 As most of the fans inside the arena seemed to be British, they became part of the program. Brown did not speak much to the crowd in between songs but the fans were out of their seats, jumping, dancing and screaming for more.

In 1989, the Roses released what could arguably be the greatest debut album in history. Each song on that timeless masterpiece is a classic and for fans it is 11 anthems of a generation, so to hear them in concert makes the spirit of the songs come alive. As songs from their 1994 sophomore release, Second Coming, were sprinkled into the 90-minute set, they also shined with their latest single, "All For One."

By the time of "This Is The One" and the showstopping "I Am The Resurrection," Madison Square Garden was a massive dance party. Even uber-fan David Beckham was in attendance to capture the action and attention the audience shed.

Fans hope for a new record and rumors are it will arrive, while that remains to be seen, moments like Thursday night show the power of what this band still has. It may have been over 20 years for them to return to New York, but it was worth the wait. Now, let's hope it is not 20 more.
Posted by Salvatore Bono at 9:37 PM