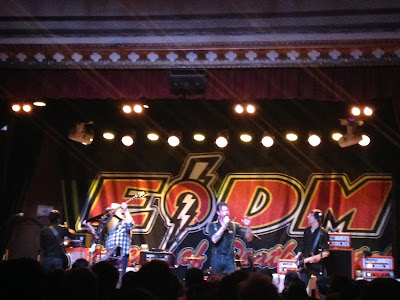 "It's 2 o'clock in the morning, y'all! This is some crazy shit," singer Jesse Hughes told the crowd at the late hour of the night or early hour of the morning, depending on how you look at it. Eagles of Death Metal were playing the Saturday night After Party for Governor's Ball at Brooklyn's Warsaw on early Sunday morning.

The band, who were supposed to close there North American tour with a Sunday evening performance at the New York festival were added to the late night bill. Due to weather conditions, Sunday's Governors Ball festivities were cancelled, making the Warsaw the California band's final stop of the tour.

Opening with the one-two rock and roll punch of "I Only Want You" and "Don't Speak (I Want Bang)," it was clear that the crowd was ready to let loose and not worry about what time it was. 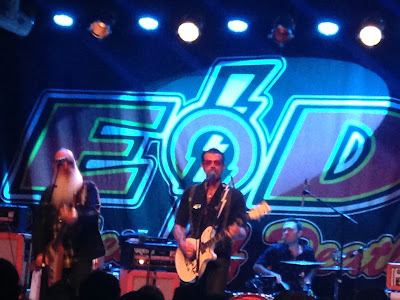 "When they told us 2 a.m., we though, 'shit, that is late,'" Hughes told the crowd about 30 minutes into the set. He then explained that they were rather inebriated because of all the time they had to get ready backstage for the gig. While they were stunned by the time of the concert, they expressed how impressed they were with the crowd. "You people are some crazy sons of bitches," he exclaimed.

It has been a long and interesting year for the band. Following the tragic events last November in Paris at Le Bataclan where 90 people lost their lives, including the band's merchandise seller, during the terrorist attacks on the city, the band decided to regroup and hit the road again. Hughes has come under fire for comments he made about the venue's security and gun control in the wake of the disaster, however, has apologized. Eagles of Death Metal have since returned to Paris and Europe earlier this year. In April they came back to America in support of their latest album, Zipper Down.

While much has gone on in their lives that would be difficult to comment, it must be refreshing and beautiful to play a venue, no matter what time, and see faces of fans smiling, jumping around and screaming the words back. 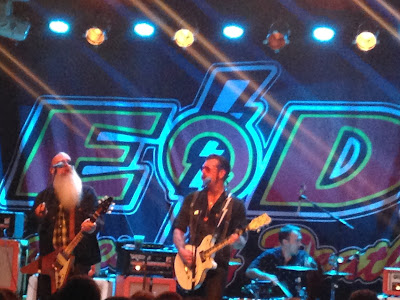 "We are just gonna keep swinging our dicks," Hughes told Brooklyn as they marched on during the 20-song set which included their Duran Duran cover "Save A Prayer," "Silverlake," "Wanna Be L.A." and "I Love You All the Time."

As fans left just after 4 a.m., they were greeted by the sound of chirping birds on the Greenpoint, Brooklyn streets. It was a long night and it was time to rest or was it? Considering Eagles of Death Metal closed with KISS' "I Wanna Rock and Roll All Night (and Party Every Day)," this is a band that shows no signs of stopping, so why would their fans?
Posted by Salvatore Bono at 3:19 PM