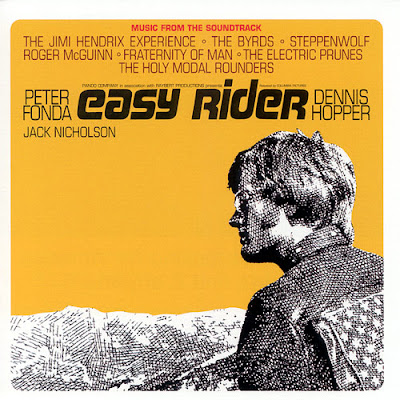 No film captured the spirit of the end of Vietnam-era more than Easy Rider. The film is a cult and historical classic. Aside from its great performances and captivating story, the film's music tells the tale of the era. Featuring the likes of The Jimi Hendrix Experience, The Byrds, Steppenwolf, Smith and others, the music captured the essence of what that generation felt, heard and endured.

A month after it's arrival the soundtrack peaked at No. 6 on the Billboard album charts in September 1969. By January 1970 it went gold. In 2004, the soundtrack got a deluxe edition with more music including a bonus disc featuring The Seeds, Jefferson Airplane, The Band, Joe Cocker, Blue Cheer, The Moody Blues and others.
Posted by Salvatore Bono at 6:01 PM