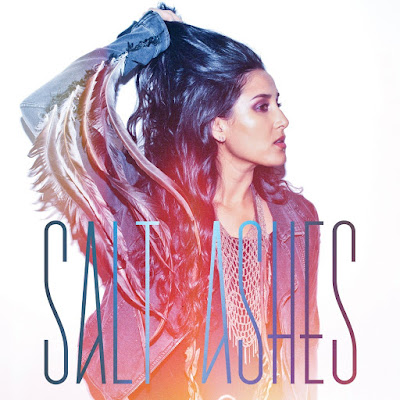 “I’m shitting my pants,” British singer / songwriter Salt Ashes admitted on a late May afternoon in New York about the upcoming release of her debut album.

The Brighton, England-based artist as been turning heads across the UK thanks to features on BBC, The Guardian, and Clash, since the beginning of the year and now she is ready for her close-up this side of the pond.

Salt Ashes, born Veiga Sanchez, will release her self-titled debut in July and while she is still an unknown to America, she is someone that can easily find her footing once DJs get a hold of her music to play it on dancefloors. Throwing back to the 80s synth era and 90s club scene, she is a breath of fresh air for electronic pop.

“Everyone’s debut album is their whole life put into this disc,” she said. “It is my whole life, especially the last five years, out there for the whole world to hear. So, yeah, of course I am shitting myself. I am excited but shitting myself. It is nerve-wracking.”

The singer, who is in her early 20s, takes her name from a carving that was etched into the side of a canoe on the Brighton pier. It is frequent visits to the beach and pier where she grew up that she uses as a muse for her music.

“When you stare into the sea you feel really little,” she told me as we spoke in the Meatpacking District. “I don’t go to the beach to sunbath. I go when it is cold and I am wrapped in a blanket and it grounds me.”

Her music is about love, loss, heartbreak, finding and losing yourself. Drawing influences from Depeche Mode, Giorgio Moroder, Martha Graham, Mary Ellen Mark, she plucks from their work to help assemble her own.

She, like all writers, pluck from her own experience. “In order for me to write a story, I need to connect with it in some way,” she said.

Salt Ashes also finds a unique way to tell a story that many of us in the Big Apple have crafted in our heads, but she has done with song – people watching.

“I really like sitting by myself and just watching people, listening to conversations and creating stories on what I think they are doing, what is going on in their head,” she declared. That creative impulse is featured on her single, “Raided,” which has the vibe of 90s house music.  The song was crafted from observations she made when attending an underground club in Berlin during a night out with friends.

In an era when music seems to be the most manufactured than ever before, the singer blends her own unique skills and sound to make something all her own. “I am just not interesting in being a certain way or looking a certain way because someone wants me to,” she said. “As long as you are happy on the inside, fuck everything else.”

She admits that getting used to being the center of attention is new to her and is adjusting to her time as the limelight beckons.  Salt Ashes admits to taking things one day at a time and not looking too far ahead for what is in store.

“All you can ever do is strive to be yourself,” she said. “I am what I am and that is what you are really going to get – which I hope is enough.”
Posted by Salvatore Bono at 3:38 PM