After being diagnosed with lymphoma in 2012, Black Sabbath's Tony Iommi's cancer is currently in remission. He told his local paper, The Birmingham Mail: "I came back to hospital straight after [Black Sabbath] finished a round of European tour dates, and the good news is that everything is all right up to this point."

British band The Maccabees are calling it quits. The band released a statement on their website saying: "After 14 years as a band we have decided to call it a day. The decision has obviously been an incredibly difficult one, given that the Maccabees has been such a huge part of our lives until now. We are very proud to be able to go out on our own terms, at our creative peak and off the back of the best and biggest shows we have ever done. There have not been fallings out and we are grateful to say that we are not leaving the group behind as a divided force. It has been a rare and absolutely incredible time that we all feel very lucky to have shared."

Slowdive are finishing their first album in over 20 years. Drummer Simon Scott confirmed the news to Undertoner, saying: "We’re finished recording the album and it will be mixed this summer, but we do not know when it will be released."

New Order are getting their own beer. The beer, Stray Dog, named after a song from their latest album, Music Complete, will be out this fall via Moorehouse's Brewery. The band said in a statement that the beer has "hints of citrus fruit and lychee, all balanced by a subtle bitterness.” Take a look at the bottle, below: 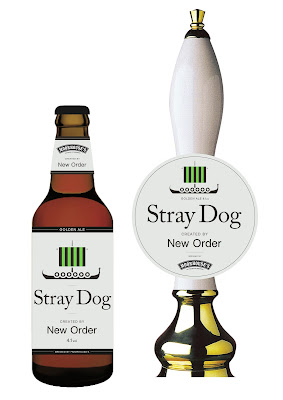 Posted by Salvatore Bono at 6:40 PM