Great Soundtracks: 'Pump Up the Volume' 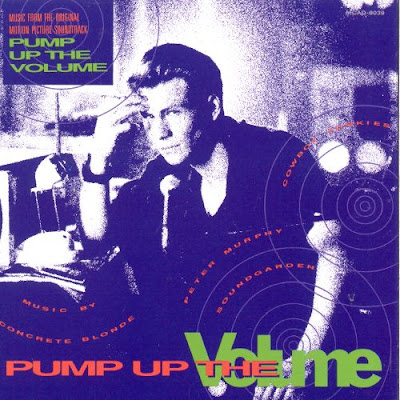 As Christian Slater enjoys a career resurrection thanks to Mr. Robot, in the late 80s and early 90s he was everywhere like Chris Pratt is today. In 1990, he starred in Pump Up the Volume, which was about an underground radio DJ playing new stars on a pirated radio station. While the film went on to achieve cult classic fame, its soundtrack became one of the biggest and best of the era.

Using music from Concrete Blonde, Soundgarden, Sonic Youth, Cowboy Junkies, Pixies, Bad Brains, Peter Murphy and more, Pump Up the Volume was an early mainstream stepping stone for Generation X. Many of the artists involved in the soundtrack achieved legendary status. One interesting note is a Beastie Boys song called "The Scenario" which was cut from Licensed to Ill because of how explicit it was appeared in the film but not on the soundtrack. The song was never officially released but has floated around bootlegs for ages.
Posted by Salvatore Bono at 5:46 PM