The Weeknd will release his new album, Starboy, later this month and took to Twitter to share the tracklisting of the record. Take a look, below:


Metallica have become the most streamed metal band in the world, according to Spotify. The company said that fans have been listening to 11,892 years’ worth of their music.

In an interview with Billboard, Q-Tip confirmed that A Tribe Called Quest's fantastic latest record, We Got It From Here...Thank You 4 Your Service, will be their last and they may go on tour without the late Phife Dawg. He said: "This is our last record, and we’ll probably do a world tour. After that, that’s it, for the rest of our lives.”

The Magnetic Fields will release a massive quintuple new album, 50 Song Memoir, in March. The record contains 50 songs, one for each year singer Stephin Merrit has been alive. According to a press release: "In addition to his vocals on all 50 songs, Merritt plays more than one hundred instruments on 50 Song Memoir, ranging from ukulele to piano to drum machine to abacus. In concert, the music will be played and sung by a newly expanded Magnetic Fields septet in a stage set featuring 50 years of artifacts both musical (vintage computers, reel-to-reel tape decks, newly invented instruments), and decorative (tiki bar, shag carpet, vintage magazines for the perusal of idle musicians). The seven performers each play seven different instruments, either traditional (cello, charango, clavichord) or invented in the last 50 years (Slinky guitar, Swarmatron, synthesizer). The stage extravaganza will be directed by the award-winning Jose Zayas (Love in the Time of Cholera, Aunt Julia and the Scriptwriter).” Take a look at the cover, below: 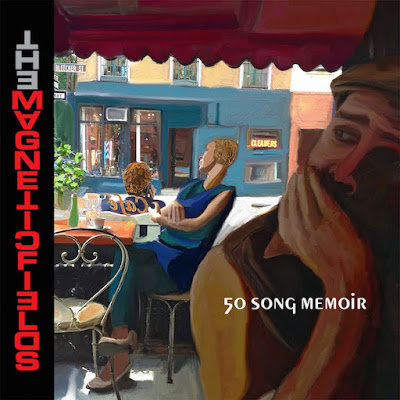 Posted by Salvatore Bono at 5:51 PM