Live Review: Temple of the Dog at Madison Square Garden 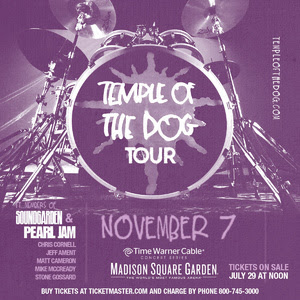 It was an event 25 years in the making. The members of Temple of the Dog toured for the very first time to celebrate the anniversary of their only record and it took them to clubs, amphitheaters and Madison Square Garden.

The band formed following the passing of Mother Love Bone singer Andy Wood. Wood died at 24 of a drug overdose, his then-roomate Soudgarden's Chris Cornell got together with his drummer, Matt Cameron and Mother Love Bone members Stone Gossard and Jeff Ament as well as Gossard's high school friend Mike McCreedy to form Temple of the Dog. They crafted a tribute record to Wood and little did they know that the band eventually formed the blueprint to Pearl Jam and help put Seattle grunge on the map.

Headlining Madison Square Garden is no easy task, both Pearl Jam and Soundgarden have done it but in this fashion it was different and there were many kinks early on.

Hitting the stage and opening with "Say Hello 2 Heaven" and "Wooden Jesus," Cornell's voice sounded off and the band did not seem in sync. By the time "Call Me a Dog" and "Your Savior" were played, things changed. It finally found a balance.

It was well worth the wait. Check out our Facebook page for photos from last night's epic @templeofthedogofficial show at MSG! #TOTDTour #TempleOfTheDogMSG (📸: Carl Scheffel/MSG Photos)
A photo posted by Madison Square Garden (@thegarden) on Nov 8, 2016 at 12:16pm PST


The Temple of the Dog album only had 10 songs on it, so for the 135 minutes they were on stage, they filled the gap with Mother Love Bone tunes and covers. Cornell became the master of ceremony as he brought the fans inside for a trip down memory lane. Playing songs from the Singles soundtrack as well as songs they were listening to while making the album. Songs like David Bowie's "Quicksand," The Cure's "Fascination Street," Pink Floyd's "Comfortably Numb," Zeppelin's "Achilles Last Stand," and the closer Sabbath's "War Pigs," the night became a rock and roll extravaganza.


Of course "Hunger Strike" was performed and Cornell had the audience sing Eddie Vedder's famous lines but to much disappointment the Pearl Jam frontman did not join the band on stage. It left a hole in many hearts, however, Temple of the Dog were there to prove this isn't going to be a Cornell show, a Soundgarden gig or Pearl Jam concert. It was there moment -- 25 years later.
Posted by Salvatore Bono at 5:40 PM