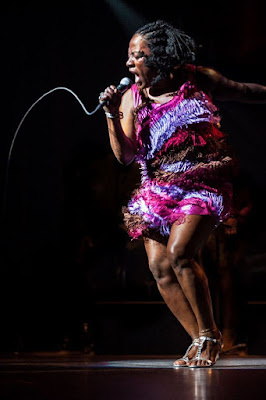 The powerhouse of soul, love and music that was Ms. Sharon Jones has passed away. According to her label, Daptone Records, who released a statement Friday night Jones, 60, passed away from a lengthy battle with pancreatic cancer.

Jones, who reached international fame fronting her band Sharon Jones & The Dap Kings, had one of the most interesting paths to music as well as prolific careers. She was an armed guard for Wells Fargo and also a corrections officer at Rikers Island, Jones began to achieve fame in her late 40s when she shifted her attention to music and her career took off.

The tough-as-nails but kind as a teddy bear New Yorker released eight records and was the subject of the 2015 documentary, Ms. Sharon Jones, which looked at her illustrious life, career and cancer battle.

We had the honor of catching her at the intimate Music Hall of Williamsburg in Brooklyn during her holiday concerts in 2011 and she was a tour-de-force. Like James Brown or the keys on Miles Davis' trumpet, she dazzled the audience with her performance, singing and energy.

Our thoughts go out to her friends, family and bandmates. She will be missed.
Posted by Salvatore Bono at 9:02 PM