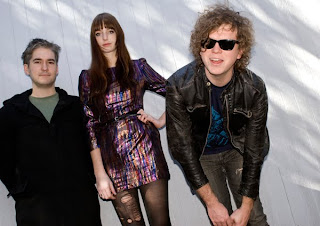 With a name like Ringo Deathstarr you have to expect something very clever and very fun. On the Austin band’s sophomore release, Colour Trip, it is indeed just that - a sonic trip of noise rock done right that makes you hear and feel every color of the rainbow. Bending sounds and fuzzy guitars with pounding percussion, Ringo Deathstarr are creating their own genre of music and seem to be having the times of their lives doing it. After various line-up changes through the years, the band has solidified to its core three members. We had the opportunity to speak to singer and guitarist, Elliot Frazer about the band's acclaim, music and why they seem to be dealing with the same fate as some great American rock bands and becoming much larger in UK rather than in the US. Take a look at our interview with Elliot below.

When you were starting out, like most bands, you went through various line-up changes. Did the changes affect your sound and style?

Well, it only affected whether or not we were gonna sound like shit or were we gonna know the songs

You hail from Austin, Texas but have such a British sound to your music. Are you influenced by the cold-wave/noise-rock bands of the 80’s and 90’s?

Speaking of the Brits, you have such a big following in the UK. Like most American bands, they get big there before getting big here, why is that?

Coming from Austin, are you inspired by the vibe and art of the city?

Yes, especially after touring all over the place, Austin kind of has elements of all the best places in the world...but nothing beats the sunshine and margaritas on the patio.

Who came up with, what really is one of the greatest names for band – Ringo Deathstarr?

Well, we didn’t want to have a name at first but we played our first gig and someone asked our name so I think it was our drummer at the time, just kind of sneezed it out

What was it like recording your latest “Colour Trip?”

Really fun, we love the studio. we like making noise and recording it. We feel like what we are doing is like the blues....you know, there’s like a template that u build off of, so that’s what we did. And we had fun doing it.

Do you feel any vindication now that it is out?

Yeah, cause I felt bad for not having it out sooner.

Ringo Deathstarr has grown in popularity over the years and “Colour Trip,” is a very anticipated release and has made you a buzz band. Do you feel any pressure to live up to the high expectations the press gives you?

Well, they have strange expectations. We are not what they think we are and we are not from Brooklyn so you can fuggeddaboudit

In the beginning when the band was starting most of the songs were written by one person. What was the writing process like for “Colour Trip?” Was everyone involved?

Yeah, we all chipped in....cant really explain it though....there was not any conscious effort to make it a big collaboration or anything, we all just say what was on our minds at the time or kept quiet or let the songs record themselves

How have fans been responding to the new material?

Well, from what I can tell, they enjoy it.

Your live shows have been very talked about due to the confrontational nature and vibe the band gives off on stage. Is that confrontation intentional or is it straight pure passion

It depends. Its been said by millions of bands but its true.. The band and the audience feed off each others energy

Also, your shows have been noted to a very loud experience. How does it make you feel to sometimes be louder than other bands you are playing with? Do you enjoy the decibel discomfort you give to the people seeing you? we like being as loud as we can because why not just do it?

You have done some many great tours with so many greats bands – Pains of Being Pure at Heart, Trail of Dead, Wedding Present. Who are you still hoping and wanting to play with?

How much fun as Ringo Deathstarr been for you? tons of fun. Because at the end of the day, if we are not having fun then why even do it?

The goal is to make music we have fun playing, and reach those people out there that want to share our same experience of noise bondage

Posted by Salvatore Bono at 7:18 PM