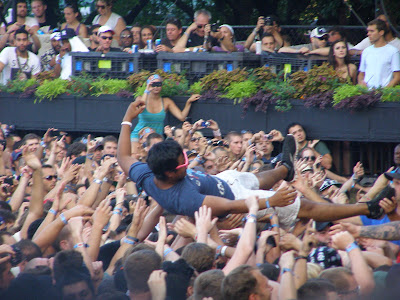 With day one being such a massive kickstart to the 20th anniversary of Lollapalooza, day two seemed to have very big shoes to fill and they found a very entertaining way to do it. As the sun beat down and hardly any breeze, it was going to be a trying day running back and forth, but all worth the exhaustion.

We started the day off with Friendly Fires and what a perfect way to introduce us to Saturday. The UK bouncy pop/electronic band were simply on fire - no pun intended. They were simply stunning and had a massive audience bopping and dancing for their 60 minute set. Concentrating mostly on their latest (and very fantastic) new album, Pala, Friendly Fires stood out as one of the best bands of the weekend thus far. Their live set just had brilliant sound, that every little jingle and jangle could be heard and singer Ed McFarlane looked like Niagra Falls with the amount of sweat dripping off of him but it was not holding him back from jumping and dancing around and making the crowd move with him. For the first band of the day, they raised the bar as to what would be excellence from the rest of the festival.

It was then off to our friends, Fitz & the Tantrums, who were on the opposite side of the park, starting and having a party of their own. We have been covering the band since their days of packing small clubs, but like watching your children grow, you just get such an unbelievable sense of pride watching them pack more people to the stage then headliners My Morning Jacket. Fitz's set was their traditional rock and soul, but Chicago was loving it. Opening the doors to new fans, Fitz won the crowd and ultimately won a city. As Fitz ended, it was the mellow sounds of Mayor Hawthorne and the County that had us relax after two pulse pounding sets. The Michigan native, Mr. Hawthorne, brought his cool neo-soul meets rockabilly sound to Chicago and made his Lolla debut, it was something to watch at the perfect time, but mainly forgettable.

From there it was then onto the massive reunion of Death from Above 1979! The Canadian duo have gotten back together after a six year hiatus and have been touring all summer. It was our first time witnessing a band we are pleased to see back. Their eclectic combo of thrash / funk / punk / hardcore was very welcomed in the eyes and arms of their fans. Playing under a backdrop of a tombstone that read "DFA 2001-2006," the band have resurrected themselves and can only have us hoping a new album gets released. For new ears or those that went to check them out, I can understand how some could be turned off, but for fans like us, it was a joy to finally witness their return.

From one reunion to another, it was then back to the other side of the park for Big Audio Dynamite. The band, fronted by former Clash member, Mick Jones, reunited also this year after a 25 year split. The dub / reggae / rock band from London played to a decent size crowd who were curious to see if they still had it, while Mick Jones shouted the titles of each song before they were played, it was "Rush," the band's biggest single that got the most applause. However, for a band that has not been together as long as they have, they still sounded perfect and sounded like then did when they first burst onto the scene in the mid-80's. They even included new songs which gets minds wondering if new material is on the horizon....

It was then onto Sacramento post-hardcore legends, Deftones. All we can say is - WOW. On so many levels they did the greatest set, given their obstacles. They were playing at the Playstation stage, which for a band of this caliber is the most incorrect spot to be playing. The stage itself is sunken into the ground, thus forcing vantage points to be minimal and the crowd they drew was unbelievably but not surprisingly massive. Between a bad stage pick and their sound just getting drowned out by sub-bass, singer Chino Moreno would just crouch down and scream his lungs out while running back and forth and making it look so easy. Deftones have faced a number of obstacles through the years, including their bassist and founding member Chi Cheng's 2008 car accident which has left him in a hospital since then, the band have pushed forward with some of their best work in a decade and showed that stage and sound issues are nothing as to what they could do. Doing a greatest hits set that included "Rocket Skates," "Around the Fur," "My Own Summer," "Digital Bath," "Change," and the epic set closer of "7 Words," which saw Chino get into the audience and act like an animal, Deftones were awe inspiring and only left the crowd wanting more.

While Deftones stole the show, it would be the anticipation of Cee-Lo who would bring down the vibe of the day with what could be the worst performance I have seen of any artist in my entire concert going career. With how bad Cee Lo was, was not only embarrassing, but I have no idea where to even begin. Walking on stage dressed as Mad Max and covering Danzig's "Mother," then into "Gone Daddy Gone," a song he sang for Gnarls Barkley, was an interesting start, will give him that. It was all downhill from there, he would start songs then stop, then start having recordings of famous songs like "Welcome to the Jungle," "Are You Gonna Go My Way," and others blare over the speakers. He looked as if he did not care and could care less what the crowd thought as they chanted "BOO" after the first 30 minutes of his set. It was then only a very, very sloppy version of "Bright Lights, Bigger City," where the crowd started filtering out. Cee-Lo then seemed to take a hint and said "I got one more, I will get out of your hair after this," and played his hit "Fuck You," at that point no one cared because all they were saying to him was "fuck you," and rightfully so.

While the night started to come down to just the final under card acts before the headliners, it was Lykke Li, who like Deftones was mistakenly placed and underestimated by the coordinators of the festival and was placed in a small stage area that no one could see her. Like Mumford and Sons last year, she drew a crowd that was so big, people were climbing trees to get a glimpse of what she was doing. The Swedish singer sounded pitch perfect and her latest album Wounded Rhythms shined like a beacon after the unlistenable Cee-Lo.

While the headliners would be rap versus rock, with Eminem taking on My Morning Jacket. I stuck to the rock for My Morning Jacket. The mid western band started off like a bomb exploding with how crisp and powerful the first hour of their set was. It was unbelievable to watch the musicianship of Jim James and his band mates as they stretched out songs and jammed through each number. Songs like "I'm Amazed," "Gideon," "Lay Low," proved why they are one of the most talked about live bands around. As the second hour of their set approached, things slowed down, almost too much as the crowd began to thin out and leaving the bands cult fans around. It would not be until the final songs of "Holding onto Black Metal" and "One Big Holiday," where they reignited their fire and brought down the house in the spirit of old school rock and roll.

While I was at the Jacket, correspondent Sean Farell was taking in Eminem. As he said, "Eminem was unbelievable, for the hour and a half he was on stage, it felt like 30 songs were played." Paying tribute to his late friend Nate Dogg, Em did a melody of tracks Nate lent his famous vocals to. It would be a headlining event of various sections as Em would then say "I just relapsed" and turned into his Slim Shady persona for a number of radio hits and songs off his Slim Shady LP. He would bring out guests Skylar Grey and Bruno Mars to sing the hooks to "I Need a Doctor" and "Lighters." Eminem proved that headlining a festival can come as natural to him as spitting lyrics, as Farell says "the intensity he brings and his constant motions on stage, he looks right at home, he knows how to command a crowd." Eminem proved that those missing him would regret it. 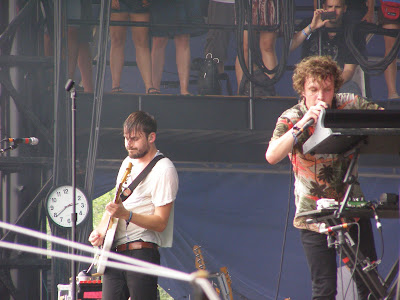 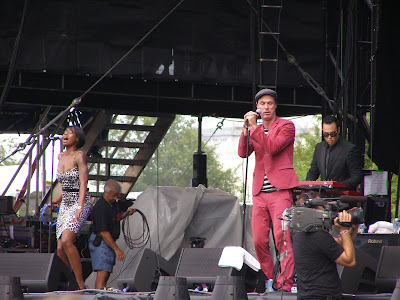 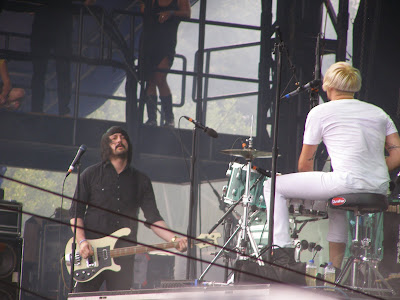 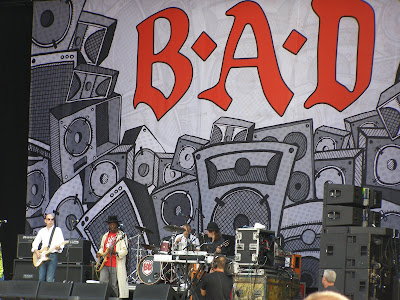 Chino from Deftones in Crowd 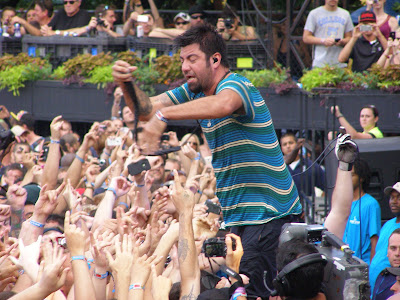 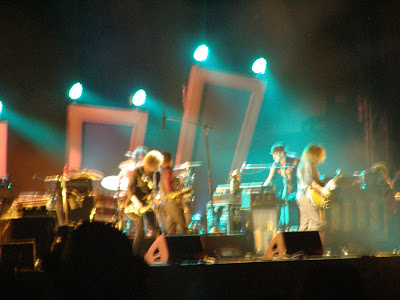 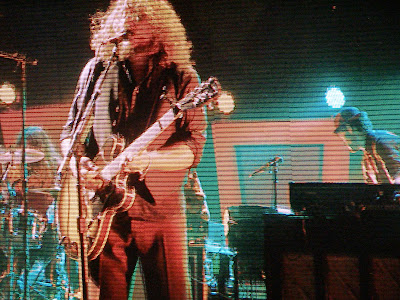