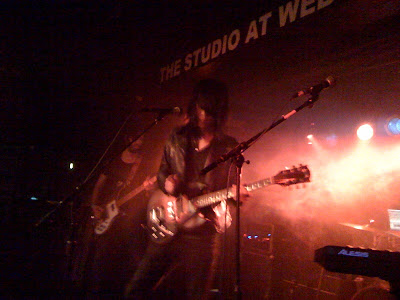 Sometime in the middle of last decade, a neo-new wave explosion of dance inspired rock and roll hit, and it hit big. With bands like The Killers, The Bravery, Scissor Sisters and many others it was a rebirth of 80’s inspired beats and catchy hooks, one of those bands, Kentucky’s VHS or Beta were poised to break out and hit the leagues of their colleagues. Touring non-stop with bands like Scissor Sisters, Duran Duran and hitting major festivals around the world and achieving critical praise, VHS or Beta were on the right track. However, plagued by label issues, internal matters within the band their road to the big leagues has taken a more scenic route than anticipated. With the self-release of their fourth album, Diamonds and Death, due next month, VHS or Beta has relocated to Brooklyn and are about to hit the road with Ladytron this fall.

In a opening performance at the Studio at Webster Hall last night, VHS or Beta flexed their muscle at one of their first New York shows in years to announce their comeback. With the only two original members of the band, singer / guitarist Craig Pfunder and bassist Mark Palgy they were joined for the first time in the city by new members for an intimate hour and fifteen minute set. With the bands new wave meets Ital-disco style, the band looked as if they were having the time of their lives. Their sound was tight and coupled with their energy, the crowd was throwing a dance party for the ages, it was proof that VHS or Beta are back on track and have such a welcomed return in their new home. With the new songs blending in perfectly with their best known songs like “Night on Fire,” “Nightwaves,” and “Can’t Believe a Single Word,” VHS or Beta may have remodeled but have not lost their touch.