In what will be a new monthly feature to the site, one that will appear in the middle of each month, we will present to you "Great Soundtracks." It is as the title suggests, great soundtracks from film, the films themselves may be great or may be awful but as long as the soundtrack is worth mentioning, we will feature it. To kick things off we decided to go with the soundtrack we feel is the greatest of all time.... 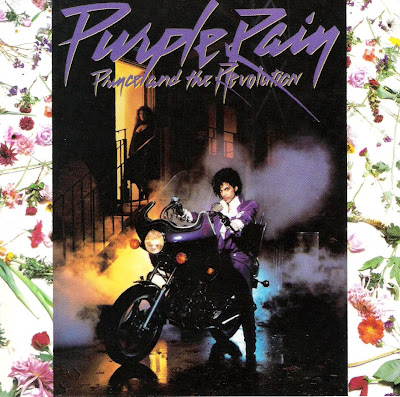 Twenty seven years ago as Prince was taking the 80's by storm, his eclectic, eccentric and electric personality crossed over into the summer blockbuster world with the release of his film Purple Rain. The story of a disgruntled Minneapolis singer trying to make it to the big time, the plot may not be groundbreaking but the music on the other hand was. What Prince and the Revolution did for Purple Rain was something not many artists have ever been able to do - make a record that happens to be a film soundtrack, stand on its own as an artists release and break away from the idea that the music was for only the film - think The Beatles with A Hard Days Night or Help. With 20 million records of Purple Rain sold, it was one of Prince and the Revolutions biggest selling albums to date. It was their sixth album at the time and first to actually feature The Revolution credited on the front cover, the album spent 24 consecutive weeks at number one on the Billboard charts.

What makes Purple Rain arguably the greatest soundtrack of all time is the fact that all these years later it still sounds as fresh, vibrant, funky and sexual as it did when it arrived in 1984. With songs like the title track, "I Would Die 4 U," "When Doves Cry," Darling Nikki," it was and still is a tour-de-force musical soundscape that travels through all areas of rock and roll combined with a funk flair, pop and R&B, it is no surprise that the success of the soundtrack was a hit all demographics. The production of multi-layered guitars over the groove of thick bass lines and sparkling synthesizer sounds, if anything was the star of Purple Rain the film, it was that the music had to be the centerpiece of the story and it shows.
Posted by Salvatore Bono at 8:05 PM