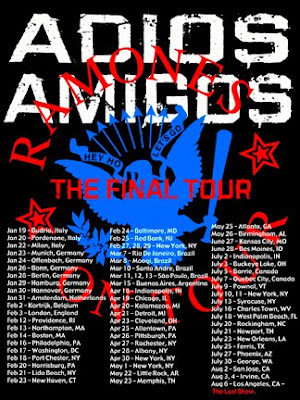 1,2,3,4! 14 albums, 8 members, 4 chords all developed by band that changed a generation, city, and music forever. Forming in Forrest Hills, Queens in 1974, The Ramones would speed up rock and roll and usher in a new sound that would eventually be known as punk rock. To most, they were the first true punk band, while MC5 and The Stooges were creating punk antics and esthetics, Ramones created the sound and style that bands would go on and mimic for decades later. While they never experienced massive success in the US, it was other parts of the world that their fans would put them on the same pedestal as The Beatles, Rolling Stones and Elvis. After countless shows, numerous line-up changes, internal issues and 22 years together, on August 6, 1996 The Ramones called it quits with a huge farewell concert in LA. In the 15 years since the band stopped playing, the music world and the history of rock and roll has embraced them more today than ever before.

In the shadow of the New York skyline, three friends; Jeff Hyman, John Cummings, Doug Colvin got together to form a band, their story starts off like any other of any group of young guys wanting to achieve rock and roll glory, struggling starts and bizarre finishes to every song but when the Ramones first came about it was not what we have come to know about the band. At first it was Joey (Jeff Hyman) drumming, Dee Dee (Doug Colvin) singing and playing bass and Johnny (Cummings) playing guitar. At the suggestion of their friend, producer and eventual next drummer, Tommy, they switched the line-up to Joey on the mic, Dee Dee just playing bass and backing vocals, Tommy took to the kit and Johnny kept to guitar and thus the foundation of Ramones line-up was formed. “It was totally raw, it was really something else” Ramones tour manager and author of On the Road with The Ramones, Monte Melnick told me in an interview when I discussed the band with him. While the band would develop their sound in Queens, they would eventually make their way to the Bowery at the infamous CBGB’S and it was there that their reputation would build. With the band’s bizarre look; tall and lanky Joey fronting with Johnny, Dee Dee and Tommy with mop-tops and all in motorcycle jackets, it was not just the sound that was strange, it was also the band’s appearance.

As they gathered fans from the downtown scene, the band would build its reputation on the road as one of the finest bands, if not greatest band to ever come from New York City, but the road was long and difficult. The bands philosophy was tour, tour, record then tour more. When I asked Melnick what it was like to be on the road with the band, he replied quickly and said “it was great!” when I asked Joey’s brother, Mickey Leagh the same question in a 2010 interview, he said “it was uncharted what they were doing, in terms of punk rock. Nobody really knew what was going on when they would see these guys, so we were never quit sure how we would be received when we went to these small towns.” While the band would fail to pack clubs initially outside of New York, their friends who were working with them stuck by them, really for work as Melnick says “I was working with bands with three part harmonies and had records myself, I thought of the band as kind of a joke, but it grew on me.” What they were creating was so original and so new that it was hard to market and hard to understand from those outside of the punk scene in both New York and London. Yet, as the years went on, the genre grew, as did the respect of the band. “The Ramones in itself was a pretty radical group and the raw stages of The Ramones were even more radical,” Melnick says.

While the Ramones built a reputation on the road, they were still searching for a hit record. With radio not playing their songs in heavy rotation, it was difficult for them to get noticed. “The Sex Pistols had a lot to do with it, they perverted the outlook of radio stations in the United States,” Melnick says “we were so close to them, but they were not us, but were tied to them.” It was in other countries where concert promoters owned local radio stations; they were bigger in Europe and South America and would get a taste of what it was like to be bona fide rock stars. With disgruntle attitudes toward their success, fighting between Johnny and Joey, Joey faced with a severe OCD problem, Dee Dee dealing with a major drug addiction then eventually leaving in the early 90’s, and a revolving door of drummers, the Ramones could have imploded and stopped at any time, yet they kept pushing on. After headlining Lollapalooza alongside Metallica and Soundgarden, the band played their final show, never to return to the stage together again. In 2001 Joey died of Lymphoma, a year later the band was inducted into the Rock and Roll Hall of Fame and solidified themselves as legends, a few moths after their induction, Dee Dee died of a drug overdose. In 2004 Johnny died of prostate cancer. While the remaining members and supporting musicians through the years still play Ramones music in concert, anytime one listens to the radio or picks up an album from any artist ranging from U2 to Pearl Jam to Green Day to The Strokes to Arcade Fire to Yeah Yeah Yeahs, Ramones’ influence can be heard. While they collectively never got to see what they would become to the history of American music, Ramones will live on through their short songs, infamous sets and four chords that altered music eternally.