Good News for Portgual. The Man

In a letter too beautiful and too good to summarize, Portugal. The Man front man John Baldwin Gourley has given fans an update to the fiasco that happened to them after their performance at Lollapalooza last week where their gear and van were stolen. Take a look at John's letter below which comes via the band's website: 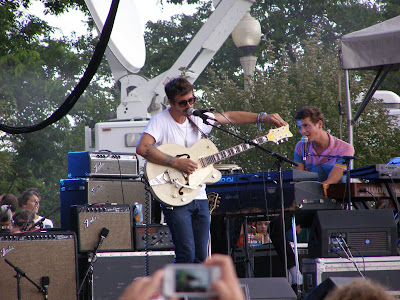 Laying in bed at 9:30pm Friday night, fittingly depressed over the theft of our gear, I received a phone call from our tour manager "The Chicago PD found our gear! Its not all there but it sounds like most of it is!". Good news right? A win for the band in a situation that seemingly happens monthly in the van and trailer touring world and so rarely followed by good news and equipment being returned. Well, it is good news and it is more than just a win for PTM, it is also a win for twitter, the world of social media, the Chicago police, and old school journalism. We had taken notice of this as soon as the first tweets started rolling, as the blogs were posted and the news story aired. It's the sort of thing that brings you close to tears (in the manliest way, of course). Tears not because we had a chance of getting our things back because, after all, they are just things but because this was people banding together over a cause. People banding together because "I was robbed before and fuck that". I'm sure we all know how it feels, and even surer still because of this response. It is violating, it is unfair, it is wrong. As much as I found humor in the fact that it took a robbery to make us a trending topic on twitter I knew it was more than the band, it wasn't about "us" at the end of the day, it was about all of us. This is a serious win for everyone that has been violated in some way. I have said this before and it will not sound any less cliche' saying it now: We can do anything when we work together. Yeah, we may not get all of our things back, most certainly guitars were sent off maybe the personal things have already been distributed, little things are harder to track and easily lost in the mix but really, who cares? They are just things. The most important thing to remember is that we did this together.

Thank you Chicago PD and don't be offended when we send a pile of doughnuts over. We are understanding in its simplicity. Its like a marathon runner eating a stack of pancakes before the run. It is much needed energy in your long days of crime solving and we appreciate this because, well, doughnuts are delicious and sending cupcakes is a little to mamby-pamby for the sissys you most certainly are not. All respect.

Thank you Twitter, Lollapalooza, Facebook, networks, bloggers, Chicago, Patton Oswalt, Danny Masterson, Ben Savage for lending your twitter accounts, and most of all you thank you to each and every individual. We thank you every day and you can't possibly know how much you mean to us. Good People

Lastly, a special thank you to James and all the people at the Hard Rock Hotel & Cafe. These people fed us, gave us a bed to sleep in and got us home to Portland, amazing. Audix Microphones, great local Portland company. Blitzen Trapper. Fender, Earthquaker pedals, The Divine Noise Cables, Orange Amps (Alex you're amazing) and of course Old Town Music in Portland. Thank you.

The case is still very much under investigation and we will share more details with you as soon as we are allowed.