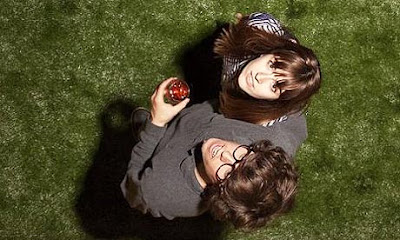 What seems to be a growing trend in indie music these days is duo's comprised of a husband and wife or boyfriend and girlfriend. We have seen it in Tennis, The Bengson's, Hank & Cupcakes and others. For LA duo, Kisses, they add to this mix but also bring their own flavor. The band is a mix of shoe-gaze and new wave all laid out over dance beats. It is very catchy, very fun but also very intimate and sexual. Kisses have created a stir in LA as well as overseas in the UK as The Guardian called them out to be one of the band's to look out for in 2011, earlier this year. With the release of their debut, The Heart of the Nightlife, the band have been continuing the momentum of their buzz and rolling along. I had the opportunity to speak with singer Jesse Kivel about the band's throwback sound, nostalgic ideas and working with his girlfriend and bandmate Zizi Edmunson. Take a look at my interview below:

You hail from LA but have such a fresh South European sound mixed with New Wave. When creating Kisses was this the type of sound you were going for?

Just something people could dance to mixed with some nostalgia. Channel a bit of Arthur Russell as well.

Given the unique sound who are some of the bands you look at for inspiration?

Arthur Russell. Some of the disco greats Moroder, Cerrone, Soccio as well as contemporary groups like The Whitest Boy Alive.

The music of the band is very fun in the sun but also very gloomy in some aspects. Is this reflective of being in LA in the perfect weather all the time?

It could be or it could just be the type of person I am. I am often a bit cynical despite all this nice weather.

Given the name of the band is Kisses and the music is made for dance floors, do you consider what you do sexual and seductive? Or just plain fun?

This is extremely sexual.

You gained attention from UK’s The Guardian before gaining much attention outside of LA. Do you feel the Brits are ahead of the curve as far as new music goes?

Not really. I think the Brits are quicker to love and forget than anywhere else. So maybe they are ahead of the curve but they dispose of you quicker.

There have been many comparisons to your voice to that of Bernie Sumner and Stuart Murdoch of Belle & Sebastian. How do you respond to such high praise?

I am so flattered!

LA has always been home to so many great artists, how does Kisses fit into the legacy of what the city of Angels has given us?

I am not sure. It is nice that I grew up here because I feel that there is some authenticity behind the music I make. With that said, I am not sure if John Phillips or any of The Byrds were born here and they still made awesome music that reminds me LA. John Phillips is tops for me.

I totally love the cover of “The Heart of the Nightlife,” where did you find the mansion? It has such a perfect Vice City style to it, who decided on it?

I shouldn't say really. It is just an old post card I found and it resonated with me. Its actually an old hotel in Palm Springs. I used it as an image to start and then moved away from it. But with some prodding from our manager and Australian label we went back to it. Which I am happy about.

We are seeing a lot of couples start bands these days – Matt and Kim, Hank and Cupcakes, Tennis. How does Kisses stand apart from the mold of just a boyfriend – girlfriend duo?

Well, we separate ourselves on strength. We could probably beat up all of those other couples so that's how we stand out.

Does being in the band together take a toll on your relationship or strengthen it?

I think both. Sometimes its stressful and sometimes its very exciting. All in all it has been a good experience.

Jesse, you are a travel writer, has some of the places you have been to, make an impact on your sound and style?

Definitely. But I have definitely been more places traveling with my two bands than as a travel writer. Travel writing is maybe an even less lucrative career than being a musician.

Where does Kisses go from here?

Posted by Salvatore Bono at 8:42 AM