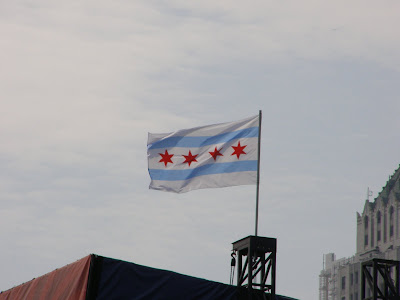 20 years in the making, the festival that started the alternative craze and scene is going on its 20th birthday and Perry Farrell has curated one of the biggest line-ups to date. As we arrived in the Windy City this morning, there was already a special feeling, even more special than in the years past that we have covered Lolla, the fact that something of this scale and of this magnitude has been brought to the mid west, the city of Chicago and its people have welcomed the Lolla spectators and bands with open arms. There is no where on Earth that could pull off a 20th anniversary like the one that is being put on right now and we have Perry and the city to thank for that.

Arriving as early as we could, the first band of the day was the husband and wife duo of Tennis. The band's perfect summer songs went well in the warm air and the relaxed crowd that were watching. Tennis' light and laid back but very poppy tunes were just what we needed to ease ourselves into the mayhem of the weekends line-up. After Tennis' 45 minute set, it was onto the bass heavy but energetic Naked and Famous. The Kiwi band are making their Lollapalooza debut after their first US tour which took place earlier this year. Their electronic rock was getting the massive crowd they drew very excited and very entertained. For their 45 minutes on stage they showed not a single dull moment and made an imprint early on in the memories of those gathering to watch.

As I was making my way on over to catch the very awesome Reptar, I heard a band crank out a perfect cover of The Ramones "Blitzkrieg Bop," with tomorrow being the 15th anniversary of the band's split and being a massive Ramones fan, I had to see who was doing it. It was the UK band, Electric Touch, someone who I never heard of before but was extremely impressed by. They moved around on stage like Kaiser Chiefs and have a very solid Britrock sound to them, a band worth your time to look into. Their 20 minute set was just a taste, but I suspect more of them down the line. It was then onto Reptar, the Athens, Georgia band who drew a fairly large crowd for the stage they were at. Reptar are a band that has been buzzing around much this year after SXSW, they have a dub/reggae sound meets rock and soul vibe that was not only great to listen to, but they were so much fun to watch. With members of the bands dressed in nylon overalls and tossing tambourines across the stage as if it were a game of catch, Reptar proved to the people watching that they are something very special. Those watching knew that this is a band on the verge of exploding at any second.

It was then onto everyone's new favorite rockers, Foster the People. The LA band drew a crowd that could have rivaled any of the days headliners. Each song sounded as if it could be a hit on the radio but the real highlight was their cover of Neil Young's "Heart of Gold," which took everyone by surprise. It was then onto Smith Westerns, the shoe-gaze rock band from Chicago that has had the indie world talking. The hometown hero's were having the time of their lives on stage and making their city proud. With perfect sound and personality, it was the perfect combination for a mid-afternoon delight.

As Smith Westerns played their final note, The Kills came on to play their first. With a one-two punch, Alison Mosshart and Jamie Hince looked as if they were out for blood. The duo were simply on fire for the first half of their set, while the second half saw them venture into much darker and moodier territory, they began loosing viewers after such a brilliant beginning. As The Kills came to a close, it was a fast run and hike over to the other side of the park for one of our favorites, Norther Ireland's Two Door Cinema Club. We have reviewed the band at every club in New York they have played at since last fall, however, nothing is like seeing them at a festival. Two Door are proving they are not just a fun band but an essential festival act, drawing in an impressive crowd that would not stop dancing and moving. When singer Alex Trimble told the audience to have the person next to them go on their shoulders, the crowd listened, his power as a front man has gone from awkward and shy to brave and strong in just a matter of months. What a band to see! What a performance! The whole audience would only beg and scream for more as soon as they finished.

Just as the bouncy and fun Two Door ended, the moody and dark A Perfect Circle began. Maynard James Keenan, along with James Iha and Billy Howerdel just crept in as if they walked out of a casket like Bela Legosi as Dracula and began a tight musical grip around the audiences attention. The beauty about a festival like Lolla is that in just a matter of seconds you can go from happy and joy with a band like Two Door then over to dark and mysterious with A Perfect Circle. Keenan's voice is the true center piece of the band, proven even more with their cover of John Lennon's "Imagine," the makes you rethink everything about the song - in a good way of course!

It was having to leave Perfect Circle early in order to run across the park again for Bright Eyes, an act that was easily one the best of the day and will be one of the best of the festival. Connor Oberst has managed to shed the "Dylan-esque" skin and "emo" credentials that critics have given him through the years, while his old persona's and comparisons still linger in his music, he is in a league all his own. Bright Eyes, tonight were just spectacular. No other word but that. It was a performance of sheer intensity and lyrical genius, as Oberst and his backing band cranked out songs from their latest effort, The People's Key and threw in fan favorites of his records from the past. While his electric material was lively and energetic, what we really want to see is Connor and his acoustic guitar and we got it. In a field packed with people, it felt as if he was playing right in our living rooms. With the epic closers of "Road to Joy," and "One for You, One for Me," which saw Conner jump into the audience and hugging random fans and security guards, it was something special and something I personally, will not forget.

Once the beautiful Bright Eyes were done, it was off to Perry's massive state-of-the-art DJ tent for the first time today. Inside was Afrojack but one would forget they were in Grant Park and thought they were at Pacha. Afrojack turned up the heat and the bodies in a wall to wall, could hardly breathe, no room to dance - in other words - very crammed and tight tent, it did not seem to phase his fans one bit. Backed by screens of wild imagines, Afrojack was partying his audience to what will be a good nights rest.

It was just a quick half hour for us at Perry's then it was off to one of the two headliners of the night - Muse. It was a night of British bands going head to head as Coldplay and Muse would duke it out for fans as they went against each other. Muse started off strong and powerful, opening with "Uprising," then going into songs like "Hysteria," "Super Massive Black Hole," "Map of the Problematic" and more. Matt Bellamy and the boys just sounded superb and their light show was something to really admire. The band command the stage like a military, even though that is what they seem to be raging against. What comes out in the band's live set is not just the amount of beautiful noise they are making, but how brilliant of musicians they are. Just before Bellamy took to the opening chords of "Guiding Light," he sat at his baby grand piano and rumbled chords and notes that would even have Mozart in awe. A true showman and truly talented band.

After and hour with Muse, it was the closing hour of the first day with Coldplay. As we arrived they were playing "Shiver," and were going into a fan favorite set of songs like "God Put a Smile on Your Face," "Violet Hill," "Everything's Not Lost," "Politik" and more. However, it was room for brand new tracks from the bands forthcoming new album that would take everyone by surprise, songs like "Us Against the World," "Charlie Brown" and the epic closer "Every Teardrop is a Waterfall" just proved that they were all meant to be heard live in concert. As the band played each note perfectly and Chris Martin jumped around on stage in his usual fashion, the real star of the night was the bands highly underrated drummer, Will Champion. Champion would take on vocal duties, guitar, bass, and various percussion all through the later parts of the bands set, it is something to be admired and discussed. What was also fitting and touching was the bands tribute to Amy Winehouse, as they covered "Rehab," just before going into "Fix You," and dedicating it to the late singer. Coldplay were in fine form and strong enough to be back on the road and getting everyone's attention again for their new material. Closing with an epic firework display, it only seemed fitting - like they were the ones lighting and blowing the candles on Lollapalooza's birthday cake. 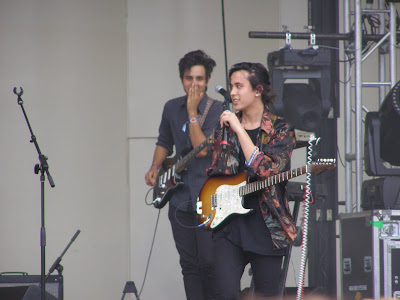 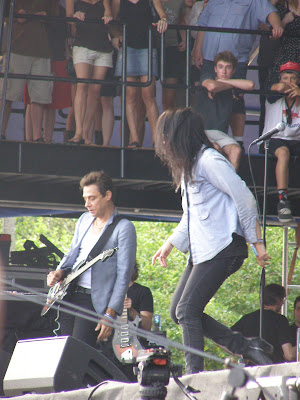 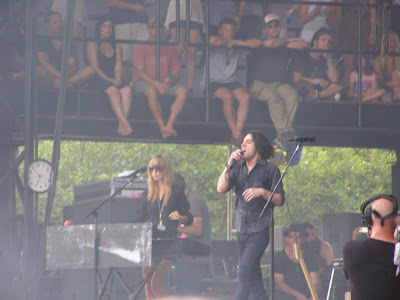 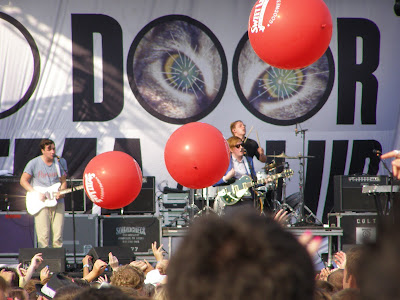 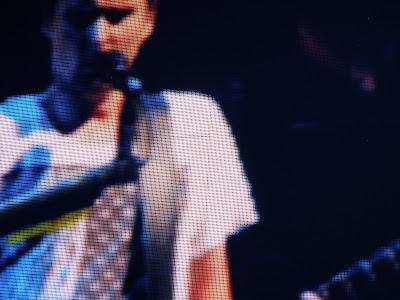 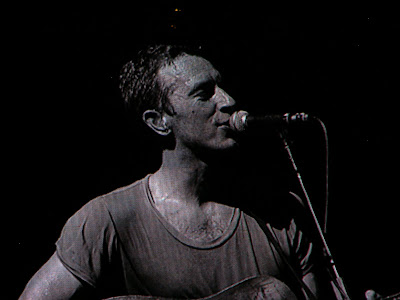 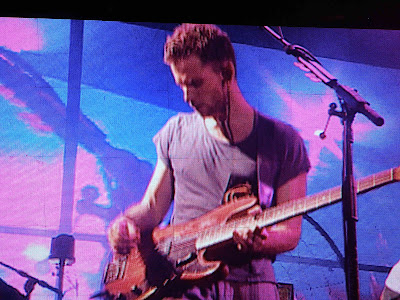