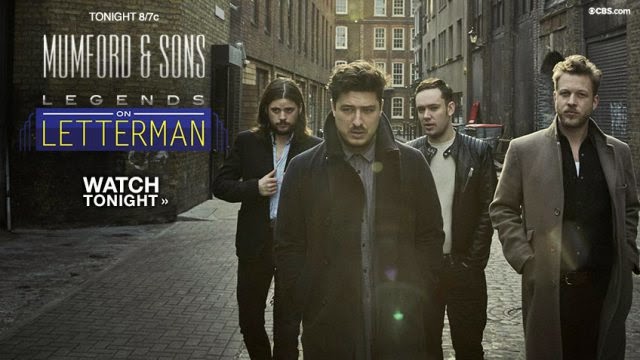 This month marks the final time David Letterman will host The Late Show after 34 years. It will be hard to imagine what late night TV will be like without the man who changed it forever. But, Letterman's channel, CBS, is making sure their legend goes out with a bang. The acclaimed Live on Letterman web series returned tonight after a nine month hiatus and feature Mumford and Sons for the kick-off as the series has been renamed Legends on Letterman.

Mumford and Sons, who just released their latest record, Wilder Mind, celebrated their new sound, album, and Letterman in a special performance for fans around the globe and the lucky ones inside the iconic Ed Sullivan Theater.

Wilder Mind is Mumford going electric and with their new sound, they are coming with a new attitude. They dress like members of Interpol but still bring the same heart and intensity to their craft they did when they were striking their acoustic instruments, now they just get to do it louder and wilder. Backed by a drummer, a horn section, and a violinist, the band resembled The National more than the Mumford and Sons fans know but that is the progression they are looking to make and they were going to make their mark in this special concert. After all, it was David Letterman who gave the band a shot in 2011 and put them on TV for the first time, now, it was time to repay the favor, one last time.

Opening with the new track, "Snake Eyes," the band showed what they were made off. An angst-filled rock anthem that shows their new plugged in persona is the real deal. Singer Marcus Mumford thanked the crowd for coming and also gave a shout out to the new record which he is "glad is finally fucking out," before jumping into "Ditmas." It was then into fan favorites like "The Cave" and "Little Lion Man," that had the crowd thumping. But it was back to the new material and ending with "The Wolf." Marcus even took time out to thank Letterman and his staff, "We know there are a lot of changes here. We know David Letterman is leaving and he will be fine, but a lot of his crew may face uncertainty and we just want to thank them for all of their support and help." This new direction for Mumford and Sons is not only welcomed but surprising, and it couldn't have come alive in a better place.
Posted by Salvatore Bono at 8:05 PM