While we wait for info on the new Frank Turner record, he took to social media to announce that his upcoming album will be called Positive Songs for Negative People. No release date or tracklisting was given, but Turner says all of that is arriving soon.

Speaking to Vegas radio station KOMP FM, Chino Moreno of Deftones said that Jerry Cantrell of Alice in Chains is on the band's forthcoming album, which arrives in September. Moreno said, "Jerry is on the [new Deftones] album. I didn't know if he wanted anybody to know or not, but I guess I've just spilled the beans. In Deftones songs, there's not really any guitar solos per se, but there was a section in there where [there was room for] not necessarily a typical solo, but it had an area where it could use something like what he does. So I sent him the track, and then he sent me a demo of it back, like, two days later. It's like you're hearing a Deftones song, but all of a sudden, a little bit of Alice in Chains seeps its way in there, and it's kind of neat. I mean, me, as a fan, I was just sitting back and a little tear came out of my eye."

Speaking to NME, Jamie xx has mentioned that his upcoming solo LP, In Colour, is informed by The xx's new album. He said, "The [solo] album feels like the next part of what we're all doing rather than just be branching off... It has definitely informed what we're doing for the next [xx] album."

Blur spoke to Billboard about their new album, The Magic Whip, and guitarist Graham Coxon as said that the band are only now just realizing what they can do together. He said, "It's weird that we're between 45 and 50 and we're only just realising the potential of our relationship musically. This process has shown us a lot more than I ever thought it would, what we like about each other and what we both enjoy about the music that we make together... If we had done this 20 years ago, it would have been a lot easier." Damon Albarn then added, "The story of this record can be compared to a middle-aged couple, out of the blue, receiving the news that there was going to be a new baby, after the original children had grown up. We had no intention of having another kid and then suddenly, almost miraculously, one appeared."

Stereophonics will release their new album, Keep the Village Alive, in September. Take a look at the cover, below: 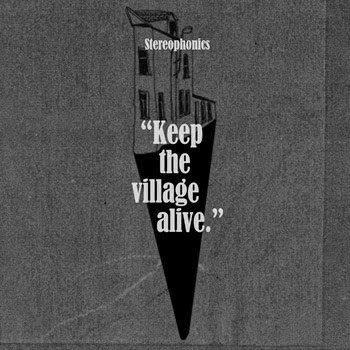