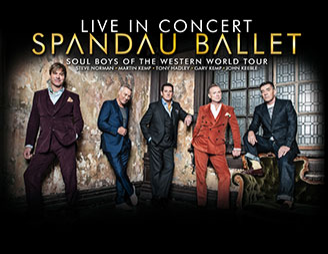 The last time London New Romantic New Wave band Spandau Ballet performed in New York City, Ed Koch was Mayor, Reagan was president, the Twin Towers proudly stood, clubs like Danceteria, Studio 54, 2001, and The Ritz were the hot spots, and Cats was only one year into it's long running Broadway performance at The Winter Garden Theater, and AIDS was still a new disease that many didn't understand. It was certainly a different New York. Hell, even the author of this article wasn't even born yet!

Now, 32 years later, Spandau Ballet returned and came back in grand fashion. The band, who reformed in 2009 after a 20 year hiatus, were in town to promote their new documentary Soul Boys of the Western World, which chronicles their rise, fall, and reunion. With no opening act, at 8:20, the band arrived on the famous stage and as the tidal wave of fans rose out of their seats and out onto their feet, it was the moment the band and New York had been waiting for. Opening with "Soul Boy," the band set the standard as to what was to come for the rest of the night -- a chance for them to flex their musical skills and take everyone back to the time when New York's nightlife was the center of the world thanks to the music Spandau and their colleagues were making at that time.

The band look older, naturally, but their musical skills have not changed. Singer Tony Hadley's voice is still as impressive as it ever was. Looking dapper on stage, the English New Wave crooner told the crowd, "32 bloody years! It is good to see you," before jumping into "How Many Lies?" While the night could have been a total nostalgia trip, the band remained defiant to showcase that this reunion isn't for the money or the past but also to forge ahead. New songs like "Steal" and "Once More," show that the band are sticking to their signature sound but for a whole new generation.

With the audience inside the beautiful Beacon dancing the night away, songs like "Lifeline," "True," and "Gold," obviously gained the most praise but in the band's two-hour set it showed they were much more than their singles.

As they took their final bows, Hadley said “We didn’t know what to expect, but we didn’t expect this. Thank you.” Guitarist Gary Kemp echoed that sentiment as he took the mic saying, "Hopefully, it is not another 30 years until we see each other again!" Hadley then took the mic again and began singing Frank Sinatra's "New York, New York," a fitting end to a top night.
Posted by Salvatore Bono at 1:02 PM