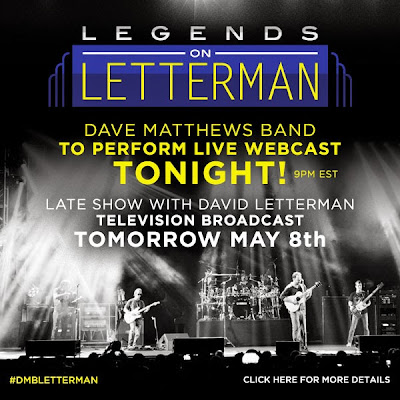 Since 2010, the Live on Letterman series has brought some of musics biggest names like Pearl Jam, Gorillaz, Depeche Mode, Peter Gabriel, Foo Fighters, Alicia Keys, Adele, Coldplay, Florence & The Machine, KISS, and many others into the infamous Ed Sullivan Theater. Each band that has played there has brought more than just their A-game, they brought something so special to the stage where The Beatles, The Doors, and Rolling Stones once graced generations before.

The Top 10 Musical Performances on The Late Show

Before David Letterman bows out as host of The Late Show after 34 years, CBS is pulling out all of the stops with A-list guests and specials, including the conclusion of Live on Letterman which was transformed into Legends on Letterman and featured Mumford and Sons earlier this week and Dave Matthews Band for the final taping.

In the mid-90's Dave Matthews Band made their TV debut on The Late Show, now, in a sort of full circle moment, they were the last guest on his web series. The band, who are about to embark on their annual summer tour, stopped recording and came to New York for this special performance. Opening with the jamming "Seven," Matthews and his band made fans make sure this was going to be a night to remember right away. Matthews joked in between songs about playing on the show years ago and gag with audience members in his Forrest Gump-esque baritone voice. The fans ate it up, it was a show like this for a band like this that is a once in a lifetime experience. Yet, that was the whole beautiful experience about Live on Letterman, you would see artists in a space that is so intimate that there is no such thing as a bad seat.

For the hour DMB were on stage, which included hits like "Don't Drink the Water," "Satellite," "Stay or Leave," "Grey Street," and "Granny," it was the most perfect way to finish this series. Fingers crossed Stephen Colbert keeps up this program after he begins his run in September.
Posted by Salvatore Bono at 8:09 PM