An Interview with The Bouncing Souls 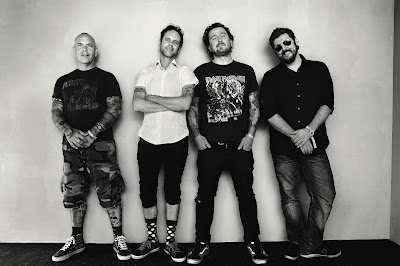 For nearly 30 years, New Jersey's Bouncing Souls have been charming audiences with their passionate punk sounds and inspiring music. The band, who just released their 10th album, Simplicity, just wrapped up a two-night sold-out stay inside the iconic Garden State venue, The Stone Pony, and will hit the road in support of their latest effort. The new record is their take on modern times and as the band has grown up, their views of the world may have changed but one thing that has been constant is their honest and DIY approach to their music. We spoke to bassist Bryan Kienlen about the new album, life on the road, and staying together for all this time.

This band is over 20 years old now and after all of this time, you find joy in making music, what still makes The Souls bounce?

It still feels the same to me to write and play music, it may be one of the only few constants in my life haha! And it remains a life line to my youth and what’s really important.

The record is called "Simplicity" and the themes on the album -- social media, the world today, society in general are anything but. Did you want to craft songs that took you back to your roots?

Yeah the lyrics take a look around and deal with some of today’s problems, but all o the bullshit just makes us long that much more for a simplicity.  The title also reflects our approach to writing and recording this time.  We wanted to just capture the band as close to live as possible, without all the bells and whistles and production.

You reunited with John Seymour to produce the album, what was it like working with him again.

Effortless. Working with John felt as if not a day had gone by.  We went through so much digging to find ourselves and our sound with John (on Summer Vacation and Anchors) that this time we were pretty much already there together.

After all this time making music, what is your favorite memory?

One of them might be recording Anchors Aweigh at Longview Farm with John.  It was amazing experience living on that farm in under a huge snowstorm with he fire place an great food everyday.  That place was so amazing.

When the band first started, did you ever thing you would still be going this long?

We never spent any time at all thinking about the future, so I guess the answer is no.  I remember thinking I’d never make it to 25 hahahaha!

The Souls have never taken the easy route and always did everything DIY, in an era when artists and even fans feel a sense of entitlement, how do you respond to that?

I’m really happy and proud of my decisions regarding how we ran the band.  Our only rule was to listen to our hearts and that’s what we did.  Money comes and goes and it’s just not as important as being able to sleep at night and be happy with who you are.  We didn’t invent DIY ethics but we carried that torch and help light the way for others.

Like "Ghosts on the Boardwalk," "Simplicity" marks the longest gap between Souls records. Why the long wait?

We took some time to solidify our personal lives and other pursuits.  I needed a long uninterrupted stretch like that to really progress in my tattooing, just as the other buds took some time to tend to their lives as well.

You have influenced so many young artists today, is there any new band or recent artist that has caught your attention?

Just discovered a band called “We’re Ghosts Now” who are pretty cool, but mostly I’m waiting for some good new punk to discover.

New Jersey is your lifeline and recently the governor of the state has sided with Donald Trump. These are two guys that clearly are against what you stand for. What do you want people to know about the good people of The Garden State that Chris Christie is getting wrong?

Fuck that slime ball.  “Bridgegate” is just the tip of the iceberg with him, thinks he’s a wiseguy.  He’s holding up progress on marijuana legalization. I just can’t hate the Republican party (or the scumbags who’ve hijacked it) enough. What a total disgrace.

In a lot of ways what’s important hasn’t changed.  All art is inspired by something, there will always be heartfelt and honest art and music being created, the trick is to recognize the real from the fake.

As more albums are made and the arsenal of music you have, what is it like putting together that setlist each night?

The funny thing is, there are some standouts that always make the set, with each new record we hope to add to the list of great live songs.  I think we have a bunch off of Simplicity.  It feels a lot like “How I Spent my Summer Vacation” which produced so many live greats.

After the shows are done and you are not recording, what do the Bouncing Souls do for fun at home?

Ride my Harley and my beach cruiser and my surfboard… Dig in on tattoo career, and enjoy living on the awesome Jersey shore with all my friends and my hot wife.
Posted by Salvatore Bono at 9:13 AM