Beck says that his forthcoming album was inspired by playing with The Strokes in Hyde Park last year in London. Beck told Rolling Stone: "It's a summer night, people have their hands up. It's a communal, celebratory thing. I wanted to take that into the studio, a kind of energy or joy. The thing that wakes you up a little bit." The untitled new album will be out in October.

Drummer J.P. Flexner has left Beach Slang. He posted the news on Tuesday on Facebook, saying in a statement: "I’m no longer in Beach Slang. Thank you for being a part of something that meant a lot to me. Now let’s hang out and do stuff." He will go back to work on a graphic design career he had before the band. A few hours later, Beach Slang released a statement on Facebook: "JP, the absolute best to you, my man. I’ll miss the dumb jokes and the loud thunder. I’ll miss how things were when things were really right. Thanks for the sweat and love. Go slay everything."

In September, The Verve will reissue their first two albums, A Storm in Heaven and A Northern Soul to celebrate the 25th anniversary of both records. The reissue series features a 3-CD set that has the remastered record, B-Sides, demos and a DVD of live performances.

Frank Ocean took to his blog over the weekend and continues to be coy about his new album, Boys Don't Cry, and hinted that it could possibly arrive this month. The LP was supposed to come last year but has been pushed back and has seen a series of rumored release dates. The latest post features a library card with a due date on it. Take a look at the post: 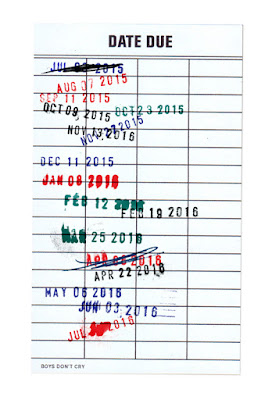 Ocean, along with Henry Rollins and Young Thug star in a new ad campaign for Calvin Klein. Watch the three below:

Posted by Salvatore Bono at 7:35 AM