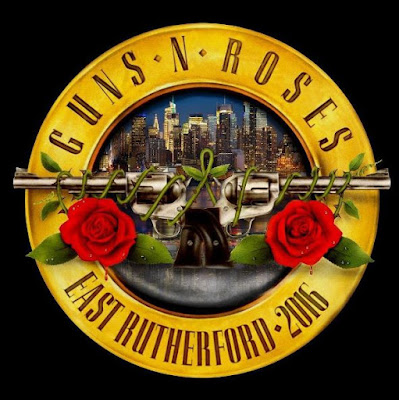 Guns N Roses returned to the Meadowlands for the first time in over 20 years this weekend. The iconic L.A. band brought their blistering semi-reunion tour dubbed "Not In This Lifetime" to Metlife Stadium.

After Axl Rose announced that Slash and Duff McKagen have rejoined the band earlier this year, the band hit the road playing Coachella. Now on a full on summer stadium tour that brings everyone back to the crazy days of their heyday.


GNR sold-out Saturday night and even caused a raucous when 30 people were busted for various causes like disorderly conduct, drug possession, assault and criminal trespassing. On Sunday, the crowd, which was packed but not sold-out, seemed to be a bit milder, maybe because they had work the next day.

Opening with "It's So Easy" and "Mr. Brownstone,"  Axl, Slash, Duff and the crew sounded as if they never missed out on playing time with each other. In a setup unlike any on the road, LED stairs were on top of the stage and under 3 massive projectors that flashed random images, animations, the band and their iconic logo. Plus the pyrotechnics and fireworks that made this feel like a national holiday, it was as if the 80s never ended and the band were still rolling. Straight away they threw in a surprise by performing "Chinese Democracy," a song in which only Axl of the original members played on, but Duff and Slash made it their own.

Axl, who owns the naming rights to the band, brought along his GNR bandmates -- Richard Fortus on guitar, whom he has played with since 2001, Frank Ferrer on drums, who has played since 2006 and newcomer Melissa Reese who joined this year to support one of the original touring members Dizzy Reed on keyboards.

It became a rock and roll spectacle for the ages and something every GNR fan, young and old, wanted to see. Playing all the hits like "Welcome to the Jungle," "Sweet Child O Mine," "Live and Let Die," "November Rain," "Nightrain," "Knocking on Heaven's Door," and the epic show closer "Paradise City," it was everything a fan wanted and more. Deep cuts like "Rocket Queen," "Civil War," "This I Love," "Coma," "Better," were played. A variety of covers aside from the ones they made hits out of like The Damned's "New Rose," The Who's "The Seeker," as well as brilliant instrumental versions of Pink Floyd's "Wish You Were Here" and The Godfather Waltz, which stole the show.


As the night went on, Axl, who ran around stage like he was 20 again, seemed to slowly loose his voice. His vocals by the end of the blistering 2 hour and 40 minute set was nearly shot and he save himself for his higher octave notes that he built a career on. However, there was enough to be distracted by like how tight the band was. It was hard to take your eyes off Slash's fingers hammering on his strings or watching Duff play as if this was the last gig he would ever have on Earth. As sweat poured out their bodies in the hot summer heat, they actually looked like they were having fun.

That was something #NY... Next up #Atlanta #NotInThisLifetime Tour #GnFnR livemu.sc/GNR_Tix
A photo posted by Guns N' Roses (@gunsnroses) on Jul 25, 2016 at 4:21pm PDT

Opening the show was legendary rocker Lenny Kravitz, who brought his own funk and flair to get the massive crowd warmed up for what was about to happen. In a greatest hits filled set that featured "American Woman," "I Want to Get Away," "Mama Said," "Let Love Rule," "Are You Gonna Go My Way," the everlasting rocker and his band jammed through each song, extending it significantly. The jam sessions for what he had added a whole new dimension to his show as he has surrounded himself with some of the best horn players and rhythm section on the planet. For the hour he was on set, not only was he the ideal opener, he made the massive stage his own.

Posted by Salvatore Bono at 6:41 PM