"Tuesday, shit day for a gig," Noel Gallagher told the sold out crowd inside New York's Beacon Theater a few songs into his set. "Tuesday in New York is better than Tuesday anywhere else," he then declared.

The former Oasis songwriter is on the road in America touring his sophomore release, 2015's Chasing Yesterday. It is the third time within a year of the album cycle that the singer and songwriter has played the city and he seems to love every second of it. "This is the best city in the world, I mean that," he declared at one point.

Listen to Our Essential Noel Gallagher Playlist on Spotify

In his second time performing and selling out the famous Upper West Side venue as a solo artist, Gallagher started the night early and his near-two-hour set featured career highlights from Oasis and his own work.

Opening with "Everybody's On the Run," "Lock All the Doors," and "In The Heat of the Moment," Gallagher was on fire. He and his band, The High Flying Birds, sounded perfect inside the theater and production of his show seems bigger than ever before. Performing under a giant screen projecting random images as well as live footage of the band, everyone was in awe of what they were doing. 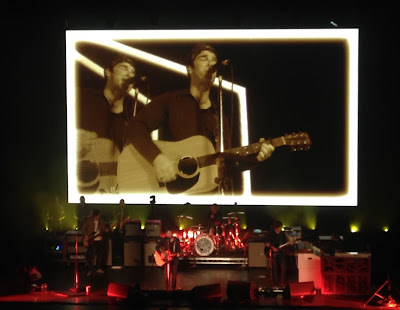 Reuniting with Oasis' final drummer, Chris Sharrock, now a full time High Flying Bird, the show was chock full of everything a fan of Gallagher would want.

"If any of you were at Webster Hall last year and think, 'fucking hell, it's the same setlist.' It absolutely is. I know it is...It's called getting your money's worth -- out of you," the cocky singer told the audience a few songs into the set.  He would later admit, "It is not the same setlist, my management wouldn't like that."

Aside from the music, Gallagher himself should be a talk show host. His witty banter with the audience is not only hilarious, it adds to the concert. He picks on the hecklers and basically admits this whole thing is for the money.

Performing a slew of Oasis B-sides like "Talk Tonight," "Half the World Away," "D'Yer Wanna Be a Spaceman," "The Masterplan," fans were in the palm of his hand. The most thunderous applause would obviously come during the well known Oasis tunes. Songs like "Digy's Dinner," and "Wonderwall," which Gallagher says "makes this whole thing possible," are given new life with him on vocals instead of Liam. The axeman even reinterpreted "Champagne Supernova" to make it an acoustic ballad rather than a psychedelic rock tune. Yet, it was the closer, "Don't Look Back in Anger," that tore the roof off the place. The audience simply goes mad for it. The song is an anthem of a generation and they won't let Gallagher forget it -- not that he ever will.
Posted by Salvatore Bono at 8:35 AM