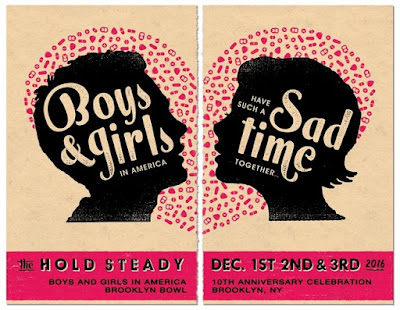 A decade ago, Brooklyn's The Hold Steady released their third album, Boys and Girls in America. The record was a critical success and it ushered the band into a whole new realm of fans, including the creator of this website. The record single handily changed the band's life and they went from struggling musicians to a rock band that has been able to find success in an era when artists within that genre struggle. Since the release of Boys and Girls, they released three other records, lost members, gained members but stayed true to who they are and to their fans.

Listen To Our Essential Hold Steady Playlist on Spotify

On Wednesday night, they celebrated the 10 year anniversary of the album in the first of four sold-out nights at the 500-person Brooklyn Bowl in Williamsburg not far from where they all live in Greenpoint.


The band hit the stage just after 10, maybe symbolically, maybe pure coincidence and began a positive rage as fans rushed to the stage as the massive night began. As the six members walked on stage, fans saw Franz Nicolay for the first time since he left the group in 2008 and gave him thunderous applause as he took his keys. As he uncorked his wine and the band got to their positions they opened with "Stuck Between Stations" and played Boys and Girls from start to finish in perfect display.

At points they were joined by Jessica Louise Dye of High Wasted and  Patrick Stickles of Titus Andronicus, who were the surprise opener of the night, as the killer party continued through the night.

The reason for celebration wasn't just that the record thrust the band into the limelight it was also a raw rock record and might be the last real rock record to come in the last 10 years. While subgenres of good old fashion rock and roll have come about thanks to Black Keys, Arctic Monkeys, Kings of Leon, they stayed true to the bar band ethos they wanted from day one.

Boys and Girls in America is also a record about leaving the shithole town you grew up with and returning to see that you have changed but everyone else has stayed the same. It is about nostalgia. It is about growing up. It is about finding yourself and losing yourself at the same time. It is also the reason why fans inside the venue ranged from 25 to 55 years old.


Following the performance of Boys and Girls in America, the band went into a hits set that featured "Constructing Summer," "Your Little Hoodrat Friend," "Certain Songs," "Yeah Sapphire" and "How a Resurrection Really Feels."

As fans threw glitter on one another and singer Craig Finn smiled from ear to ear screaming "There is so much joy in what we do," he, like the people in the room, is a clear fan of his own work. After all, certain songs they get scratched into your soul.
Posted by Salvatore Bono at 7:33 PM