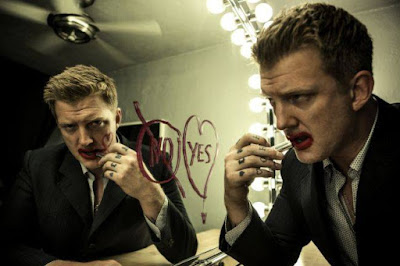 When we celebrated our 5th anniversary in 2011, we honored our first five years with an artist that made our time as a website worthwhile. Damon Albarn became the first recipient of this award and since then, we have picked like-minded workhorses that have influenced music and never settle for less than the best.

In the past we picked:

Now, this year we award a rock and roller who could have come from the genres golden era but pushes music to beyond the limits of his imagination.

Whether he is fronting Queens of the Stone Age or drumming for Eagles of Death Metal, Josh Homme has spent his life making music. Starting almost 30 years ago with Kyuss, Homme has been making stoner rock for people who don't like stoner rock. From there it was the more successful Queens and Eagles of Death Metal that helped him become a household name. Also linking up with John Paul Jones and Dave Grohl for Them Crooked Vultures, Homme has become a favorite frontman. However, his work behind the decks has gained him even more acclaim.

Producing for artists like Arctic Monkeys, CRX and this year he crafted Iggy Pop's best record in decades with the fantastic Post Pop Depression. Performing, touring and producing Pop's latest, Homme solidified himself as someone who has mastered his craft. A buddy to the music community he has made guest appearances on songs from UNKLE, Death From Above 1979, Nine Inch Nails, Mondo Generator, Mastodon and others.

We applaud his work ethic and love of rock and roll which is why he became our 2016 Icon.
Posted by Salvatore Bono at 5:12 PM