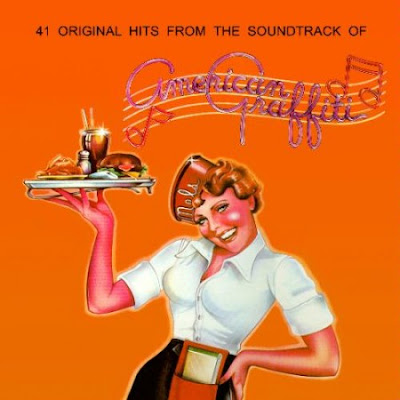 In 1973, George Lucas directed a film that would defy the generation before him -- American Graffiti. The film, which captured the greaser and Americana-era of the 1950s was a nostalgia trip even in the early 70s. Long before he directed Star Wars, Lucas was making his mark on American film and pop culture. As much as the film played a role for the careers of Ron Howard and Harrison Ford, it also was centered around the music of the bygone era.

With tunes from Del Shannon, Bill Haley & the Comets, Buddy Holly, The Tempos,  The Beach Boys, The Big Bopper and a slew of others -- the soundtrack featured 41 tracks of early American rock and roll. After it was reissued in 1993 and then again in 1998, the soundtrack would go on to become triple platinum and one of the best selling and most beloved movie soundtracks in history.
Posted by Salvatore Bono at 5:51 PM