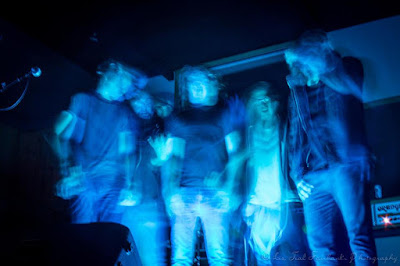 Meteor showers happen all the time and as the giant rocks fall from space, I often times wonder what they sounds like. When I first heard Boston's Astronoid, I fully understood what the sound of something coming from the greatest regions of our universe and into our atmosphere would sound like. The band, who released their debut, Air, in May, take a sound that mixes the black metal of Deafhaven the atmospheric progressiveness of Circa Survive and the intricate rhythm changes of Dillinger Escape Plan and roll it into one collective being that brings an intensity and beauty that only music could offer. The band, who formed in 2012, from the ashes of the prog band Hetfield and Hetfield have been releasing music independently including their debut this year. As the band continue to tour and perform, here is looking out to seeing them in 2017.

Posted by Salvatore Bono at 6:45 PM