Speaking with Leon Else 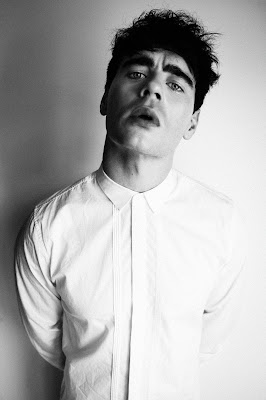 As the year winds down and we begin to look ahead, the future seems to be bright following a dark 2016. As new music will arrive next year, one artist who has been burning up the dancefloor is ready for his close up. British singer, songwriter and performer Leon Else will release his Interscope Records debut sometime in 2017 and as he preps for it, the 24-year-old released his acclaimed EP, River Full of Liquor and has captured the attention of fans, critics and music lovers around the world. We caught up with the young lad about his new singles, "Black Car" and "Dance," as well as his battle with ADHD and depression, plus what lies ahead.

Take a look at our interview with Else below:

Off the bat, I want to say that your song "Black Car" might be the sexiest song of 2016. What was the influence behind the track?

Haha, ahhh thank you!  I appreciate that a lot. I wrote "Black Car" whilst in my then brown car (I know have a black car) that I hated. It didn’t fit my “look” or vibe and I loathed driving it. Therefore, one day I was driving to go hiking and I started singing the melody from "Black Car" with the lyric - “gotta get a black car, the blackest car you’ve ever seen,” and that's where the original idea came from. My vision of this dark, mysterious, sexy, cool menacing black car that I was so desperate to have and drive, so everyone could see me.  I developed it further and deeper into the whole allure of an object..and desire of having materialistic things can make you more attractive to people, and make some people do stupid tings, or get themselves into sticky situations ( like Suki Waterhouse in my music video haha).

There is so much soul in your music, who were some of your influences?

The people who I look up to are David Bowie, Prince, and Queen mainly. I do look to other musicians for influence, but these are my main ones. They are the best. They were themselves. They were trail blazers.

With a few singles under your belt, when can we expect your Interscope debut?

I would say they are introductory songs. The start of introducing people to the real me and my world. I think expect the unexpected, because you can’t predict me because I can’t predict myself. I’m different people everyday. I’m not one thing. I’m a thousand things on rotation. So much music changes with me, depending on how I’m feelin. It will still be pop, but just wrapped differently. i want to keep you guessing. I want to explore, and I want people to come with me on that exploration. There's so much out there, and I’m like a kid in a sweet shop with sounds and music - I want to try it all. So basically don’t expect, I want my fans to just be open.  Oh shit - I just realized that you ask what can we expect you were meaning my album. HAHA!. Oh well keep that bit in cause we spoke about it now. Debut out next year.

Your story is one of resilience, you grew up dirt poor in the UK, how important is it for you to make this career and life work?

It's everything. It's absolutely everything. I have no plan b, and I don’t intend to go back to where I came from. When you come from nothing you then know what having nothing feels like. I don’t and I won’t go back to that place. i just have plan A. I've worked eveyday since i was so young. I've sacrificed more than people will ever know or could imagine. I’ve over come things people wouldn't believe and that was not in vain.  I’ve lost so much for this, but I won’t stop. I will never stop. It's all I have, all I truly have, so I always make it work.

How has your upbringing influenced you?

It has made me learn when you want something, you get off your arse and make it happen. Don’t wait around for anyone or anything. Hard work is something I’m so grateful for, and the struggle of growing up I am also so thankful for as it has made me resilient, and so driven. It gave me that hunger to do something, and to make something of myself. So my upbringing’s influence on me has been pivotal.

You also have ADHD and depression, how important is it to erase the stigma of mental health in what you do?

It’s really important to me that I speak about it, and share my ups and downs with people. So many people pretend everything is ok because they are worried and suffer in silence because society judges us. I don’t want to just help erase stigma in the arts, but I want to help erase it in the world. So many of us have mental health issues, and I think it's something that should be bringing us together if we would just speak about it. We would realize more people, than not, suffer from some sort of mental health issues. No matter what class, or where you live, or how rich you are, mental health is something that effects everyone, and it should be something that we speak about and actually support each other. Life isn’t Instagram. Behind that picture, life is fucking tough. I just want to be open, and speak freely about my issues I face, and hope it helps someone else somewhere know they aren’t alone. Most people feel alone, when they don’t have to be.

Your music has so much release and emotion to it, both joyful and morose, when crafting a song how much of you is being put into the lyrics and subject matter?

Everything. Sometimes I'll push it slightly to change how honest I actually want to be, but everything I write is truth. The matter is me. The music has to be me. If it's not, then it wouldn’t be me and I couldn’t create it.

Your single "Dance" is an instant club banger and the video shows you having the time of your life. How long have you been dancing and was it something you always saw yourself doing as a profession?

Thank you! I was friggin dying on set - 12 hours of dancing straight was tough!! I got into dancing as an escape to get out of my hometown. I was kinda like 'Billy Elliot.' I started late, and I would go and do ballet with the little girls when I’m tall, and was so out of place. But I kept at it. I worked peeling potatoes to save up and pay to get to London to auction for the top dance schools. I honestly didn’t think I would be good enough to get it, but I thought if I could just show them how much I’m willing to work. It paid off and I got scholarships to my surprise. I then moved to London and trained professionally for 3 years, and danced professionally for about 3 years.

You were also in the film, "Nine," a take off of Fellini's "8 1/2," what was that experience like? Also, much in character was Daniel Day-Lewis during filming?

It was the most incredible experience. Truly. To work with Rob Marshall was a dream. We were treated so well and that was amazing because most of the time dancers work the longest and hardest hours and treated the worst. However, not in 'NINE.' It was more like being treated like royalty. It will be something that stays with me forever. Daniel was properly in character, the whole time, no resting. It was inspiring to see someone get so into a character. He's amazing.

How did the role in "Nine" change your career?

It changed my career, because that was when I said to myself “fuck this, fuck being the background guy.” After that I decided that's it. I’m going to do my music, I had always continued to write music all this time whilst dancing. So being on that movie set was a changing point for me, since as a dancer I didn’t know how to top that. I had achieved so much, so early on, as a dancer that I needed and wanted so much more. Watching everyone stand in the spotlight as a star and the lead I thought I could that. I was done and never danced professionally again.

Forward; I continue and carry on working my ass off, putting everything into my music and craft, seeing where it takes me. I want to be the best, I want to be the biggest, and I don’t intend to stop even when I’m there because I'll need something else. I want to do so much, with so little time. Time is just running away from us. I have an amazing label, amazing team, amazing fans, and together was just move forward. oh and I need to try and find time to enjoy it more, because I’m always onto the next thing. Or looking for something more..whatever more is.

Posted by Salvatore Bono at 1:28 PM