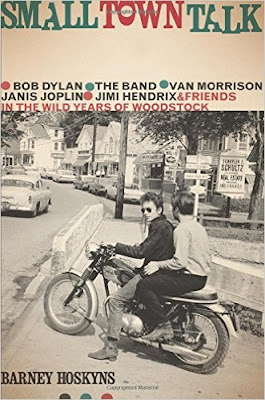 When people think of Woodstock, they immediately think of the 1969 music festival and the summer of yesteryear where artists gathered together for three days of peace, love and music. However, the Woodstock festival didn't take place in the town. Instead, it took place 60 miles away in Bethel Woods, New York. However, life inside Woodstock during the 60s and 70s was filled with music anyway and Barney Hoskyns 2016 book, Small Town Talk captured that.

From Bob Dylan, The Band, Van Morrison, Janis Joplin, Jimi Hendrix, these were the people who frequented the tiny city in the Catskills. Hoskyns gets first hand interviews and accounts from the locals, band members and day trippers who would live within a few square miles of rock royalty. For anyone who lived that era or anyone who loves these artists, this book is a must.
Posted by Salvatore Bono at 5:45 PM