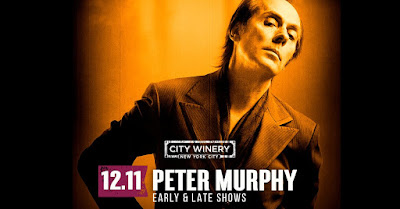 It was a night of rarities for fans of Peter Murphy. The Godfather of Punk played two back-to-back sets at City Winery in Manhattan's swanky SoHo district. When the Bauhaus singer was breaking in America over 30 years ago, that neighborhood was one for the artists, part of the counterculture and the trendy folk of the era -- the idea of a winery in SoHo was something Murphy nor the people that inhibited the area ever thought about.

Now, today, like most of New York City everything has changed and SoHo is a trendy mall with slivers of the place it once was. For fans of the icon, it was strange that he would perform in a place like City Winery, known mainly for folk singers and lighter artists but like most things Murphy does, he made it his own. 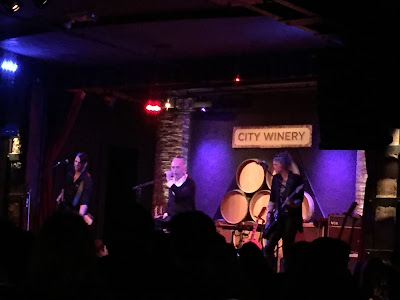 In the first of two shows, Murphy opened with "Cascade" and "Secret" and his intimidating tone, disposition and music took center staged. Backed by two other musicians and an audio track which played either percussion or synths, Murphy's "Stripped" tour was getting itself ready for a long night.

After his first few tunes, Murphy, who hardly speaks in concert, began to crack jokes, bash Donald Trump and show off a charm that is seldom seen.

"I left England a long time ago, so I had nothing to do with Brexit, but you fuckers voted for Trump?! Are you fucking crazy?! That is crazy," he said.

As a majority of the audience laughed, a handful of people raised their hands proudly to indicate they voted for the president-elect, Murphy of course, let them have it. Politics aside, the singer also performed songs from the band that made him an icon as well as his hero, David Bowie, whom he paid tribute to.

"To Iman, who lives somewhere in this city, our hearts are with you. To David, wherever you may be, we miss you," he said after playing Bowie's "The Bewley Brothers."

In the 75 minutes he was on stage, he made a venue like City Winery, which would have been obtuse for anyone of his genre to perform in, and made it feel right at home. It was a rare night to see Murphy in such a small room, but also a unique opportunity to experience a different side of someone so mysterious.
Posted by Salvatore Bono at 8:31 PM