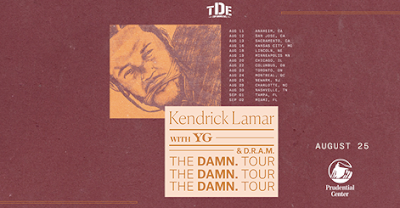 On Friday night, Donald Trump signed an executive order to ban transgender troops from the military, he pardoned noted racial profiler former Arizona Sheriff Joe Arpaio, and the president went on vacation after another vacation as a hurricane is getting ready to slam into Texas and Louisiana. That all happened as fans from across the tri-state area flocked to Newark, New Jersey's Prudential Center as the most important voice of a generation and someone whose music has become part of the anti-Trump movement -- Kendrick Lamar.

Lamar, who is nearing the end of his highly successful Damn. Tour, played the New York area for the final time this summer after hitting Brooklyn last month for two sold-out concerts.

"We worked really hard on this record and it feels great to bring it to life, in 3-D, and play it for all of you," the Compton rapper told the packed audience Friday night.

Prior to taking the stage, a black curtain draped over the stage with the logo of the tour, around 9:15, it dropped down to reveal veteran hip-hop producer Kid Capri taking the stage with just a mic in his hand as he introduced the rising icon everyone came to see. The lights dimmed, and the screens to the sides of the arena, as well as one massive one in the back of the stage played a short film of Lamar getting into his character, "Kung-Fu Kenny," which would be the motif of the night's performance. 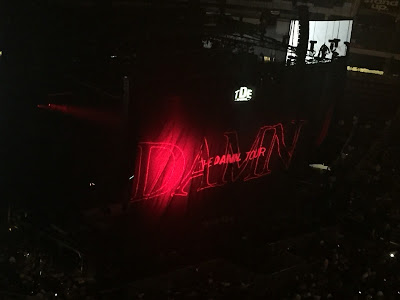 As Lamar rose from the bottom of the stage dressed as a ninja, he held a kneeling position for applause before exploding into the mic as his stormed through "DNA." He then jumped into "ELEMENT." before playing the first non-DAMN. track, "King Kunta," off 2015's best album and one of the greatest records ever made -- To Pimp a Butterfly.

The crowd was in the palm of his hand as they screamed back the words, making the 30-year-old smile as he spit into his mic. The audience was full of energy, which the rapper fed off of. He would profess numerous times what it meant to be playing a place like Prudential Center and how he appreciates the support and love of his fans. Lamar also asked if he had any "Day Ones" in the audience, as many in the room chanted, he threw it back for them with songs like "Swimming Pools," "Backseat Freestyle," and "Bitch Don't Kill My Vibe," from his major label debut - Good Kid, M.A.A.D. City.

Lamar would also cover Future's "Mask Off" and Schoolboy Q's "Collard Greens," and rapped his verses from the respective songs.


‪@kendricklamar is #LIVEatPruCenter tonight for the #DAMNtour! ‬
A post shared by Prudential Center (@prucenter) on Aug 25, 2017 at 6:44pm PDT


It was impressive set that featured the West Coast rapper performing on a small B-Stage in the middle of the arena which levitated him above the crowd. Lamar was also supported during his show my back-up dancers dressed as ninjas and a contortionist who at one point, lift the rapper up in the air with just on leg and arm as she held herself and the star by her right arm which was perched on the stage.


Listen to Our Essential Kendrick Lamar Playlist on Spotify

As visuals from around the world, nature, and the news flashed across the screens, including a moveable one which rested above the stage and eventually was lowered to the floor, Lamar took his fans on a journey as he brought his blockbuster new album to life.

While DAMN. came alive in Jersey, at his has all summer, it also proved that Lamar has a way to connect with his audience like the greats before him including U2, Beyonce, Jay-Z, Bruce Springsteen, all do by giving shout outs to various people in the crowd that caught his eye. It was those fans that helped elevate the people around them as the highlights of night included virtual A Capella renditions of "Alright," "LOVE.," and "HUMBLE." -- which he restarted as the room screamed the words back to him that no backing track or musician (who were hidden from view) could be heard.

Those songs became the rally cry for peace and love in our tumultuous times and were given to us by an artist whose integrity and creativity knows no bounds. The DAMN. Tour is much more than a concert but more like a sermon.
Posted by Salvatore Bono at 9:40 AM