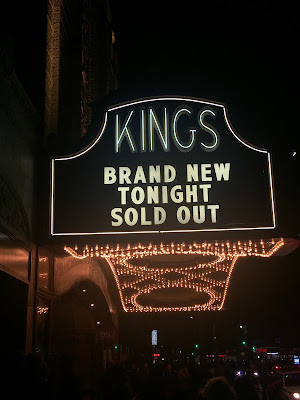 In what could be one of the best gigs of their 17 year career, Long Island's Brand New had a sort of homecoming inside the majestic Kings Theater in Flatbush, Brooklyn, Thursday night.


Listen to Our Essential Brand New Playlist on Spotify!

The show, which went on sale shortly after they surprise released their fantastic new record, Science Fiction, sold out within seconds. As fans, many of which paid an exuberant amount on third party ticket sites, filtered in for a gig they will never forget.

Brand New concerts have always been hit or miss but lately the band has been stepping up their gigs making the band with the cult-like following so much more in demand than ever before. Thursday night was proof of that. 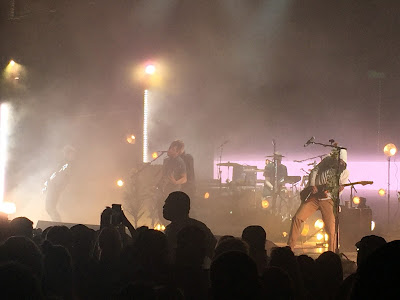 As they hit the stage just before 9 p.m., a screen dropped down from the front of the stage which projected various LED images of fire as they played behind it opening with "Lit Me Up." The setlist, which was heavy in Science Fiction songs, sounded great and brought the new material to life with many fans hearing it live for the first time. As the screen rose after four song to reveal the band members, which also now features Kevin Devine as a touring mate, in a much more fuller fashion. Fans could see the typically serious and stoic frontman Jesse Lacey smile once in a while and even dance -- which is a rarity.

Lacey's disposition seems to be indicative as to where his career has gone. Eleven years ago he was screaming "I want to die!" at Madison Square Garden opening for Dashboard Confessional. Two years later, at Lollapalooza 2008, he was telling fans to not see his band and "go see Explosions in the Sky," later cutting Brand New's set short by a half hour. Now, it is a different Lacey. He seems more relaxed, at ease with who he is as an artist, person, and businessman. His lack of tension is now reflective into how he performs. 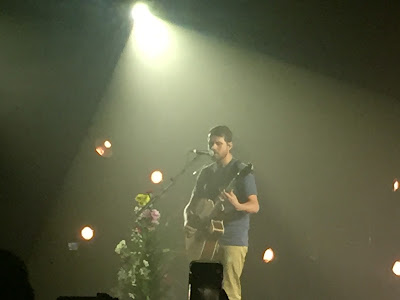 While the new songs sounded very alive, it was the older tracks and fan favorites like "Okay I Believe You, but My Tommy Gun Don’t," "Sic Transit Gloria… Glory Fades," "I Will Play My Game Beneath the Spin Light," "Degausser," "Jesus Christ," and "Sowing Season,"got the most attention from the crowd.

There are rumors and murmurs that the band will break up next year, following a 2016 campaign where they would close their gigs with an epitaph across the screens which read "Brand  New 2000-2018." Yet, the concert at Kings Theater didn't feel like this is coming close to the end.

Following the hour-and-40-minute set, the band departed to the wings and Lacey returned with an acoustic guitar in hand to perform "Soco Amareto Lime," the only song played from their debut, Your Favorite Weapon. As the audience drowned out his vocals, he seemed to get emotional and altered the lyrics, closing the song with “I’m just jealous ’cause you’re young and in love." As he thanked everyone for coming out, he waved goodbye and faced immediate joy after he saw his child, showing that this is what he is doing it all for.
Posted by Salvatore Bono at 2:19 PM