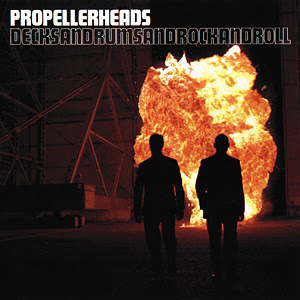 Almost 20 years ago, one of the coolest, slickest, and funkiest records to come out of the 1990s was released. British producers Will White and Alex Gifford teamed up for their only studio album under the moniker Propellerheads. In January 1998, they released their debut,

DecksandDrumsandRockandRoll. The record, which captured the mood of a James Bond film, mixed it with the cool of the Britpop movement of the mid 90s, and tied in with the new digital sounds emerging from London like trip hop and techno, the duo captured it all in an album which spans nearly 70 minutes. Featuring vocals by  Shirley Basey, Jungle Brothers, and De La Soul, as well as production by Prince, Propellerheads in many ways laid the foundation for Gorillaz and helped mix hip-hop and electronica in a smart fashion. While the album produced a number of moderate hits like "Take California" and "History Repeating," it helped showcase what two guys with some decks, drum machines, and rock and roll attitude could do.
Posted by Salvatore Bono at 1:34 PM