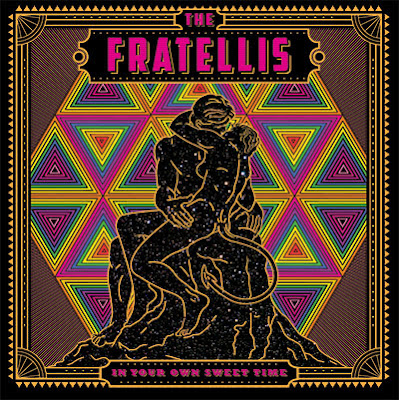 The Fratellis will release their new album, In Your Own Sweet Time, in March. Take a look at the cover, above.

Yeah Yeah Yeahs will release the 15th anniversary edition to their fantastic debut, Fever to Tell, in November. The reissue will featured the remastered record, B-sides, demoes, and unseen photos.

Arctic Monkeys are sad to be recording their sixth album in a secret location. The record is said to be out next year, according to reports.

A tune from Miles Davis and Deep Purple have become the first songs to be transferred into DNA. Twist Bioscience, a company that specializes in DNA synthesis, announced that it had encoded Davis' "Tutu" and Deep Purple's "Smoke on the Water," after they worked with Microsoft and University of Washington researchers to transfer the songs into actual DNA. The way to make is through binary code which is converted into the sequence and language of DNA. The songs came from recordings from the Montreaux Jazz Festival archives. “The amount of DNA used to store these songs is much smaller than one grain of sand,” said Karin Strauss, Ph.D., a senior researched at Microsoft, in a statement. “Amazingly, storing the entire six petabyte Montreux Jazz Festival’s collection would result in DNA smaller than one grain of rice.”

Posted by Salvatore Bono at 1:09 PM